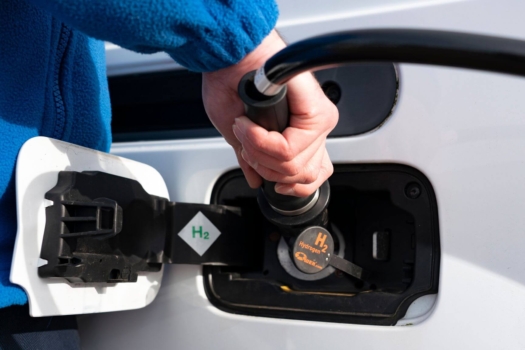 The £1m ‘Project Vanguard’, led by Cheshire East Council and Storengy UK, is thought to be the first of its kind in North West England.

Michael Gibson, Manging Director of Storengy UK, said, “We are proud to be delivering this innovative project for Cheshire East Council.”

“We are one step further in demonstrating that hydrogen is a viable green fuel for transport and working with Logan Energy we are keen to support Cheshire East Council meet its ambitious carbon footprint and air quality objectives.”

Hydrogen fuel produced at the unit will be used to the council to support the rollout of two dual-fuel waste-disposal trucks which have been converted to run on hydrogen specifically for the project.

The hydrogen-powered, ultra-low emission trucks are planned for use across Cheshire East where improving air quality is a key objective of the council. Storengy UK will also convert one of its fleet vehicles to dual fuel for use at its site.

Read more: Rubbish in Cheshire to be collected by green hydrogen-powered bin wagons

Bill Ireland, CEO of Logan Energy, commented, “The demand to switch to a low-carbon economy is greater than ever before.”

“The Middlewich environmental hub will provide an opportunity to explore how innovative hydrogen technology can be used as an efficient and economic ultra-low emission solution for local authority vehicles.”

The project received a £345,000 grant from the Warrington and Cheshire Local Enterprise Partnership, in addition to public and private sector funding. As well as the waste-disposal truck conversion, the money will deliver the green hydrogen fuelling facility in Middlewich.