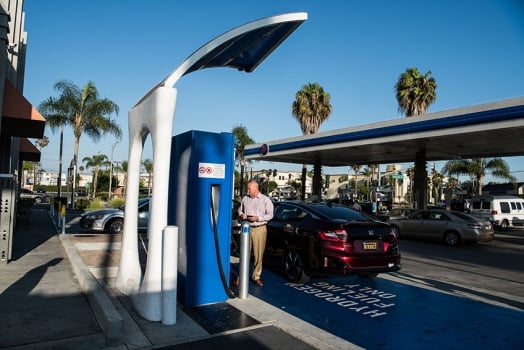 Hydrogen-fueled cars have become increasingly popular in California, though they still account for a tiny fraction compared to the number running on gasoline. Getting those vehicles to move beyond the state’s borders may require 18-wheelers crisscrossing America’s highways leading the way.

Research at the National Renewable Energy Laboratory (NREL) suggests a shift in long-haul trucking toward hydrogen, which would necessitate a coast-to-coast network of fueling stations.

Before that can happen, however, scientists must answer certain questions.

“That’s an area industry is very much looking for help with,” said Keith Wipke, manager of NREL’s Fuel Cell and Hydrogen Technologies program. “What are the bottlenecks? What are the challenges? What are the fueling methods and protocols that should be adopted? The addition of heavy-duty hydrogen vehicle research is important for the program, as it is a market with a big impact on energy use and emissions.”

With few exceptions, most of the retail hydrogen fueling stations across the United States are in California. The more than 40 stations there are capable of dispensing nearly 12,000 kilograms of hydrogen daily, or enough to fill about 17,000 passenger vehicles. California’s stated goal is to have 200 stations by 2025.

Cars such as the Toyota Mirai, the Hyundai Nexo, and the Honda Clarity are electric vehicles but fueled by hydrogen rather than recharged with electricity. The only emissions from the tailpipe are droplets of water. The hydrogen is dispensed in a manner similar to fueling a gasoline vehicle and filling a 4 to 5-kilogram tank can take from 3 to 5 minutes—much faster than the time required to fully charge an electric car with similar range. With a full tank, a hydrogen-fueled car can travel more than 300 miles.

Buses fueled by hydrogen are already on the road, including in Ohio and California, but they return to a central depot at night and do not rack up the miles a heavy-duty truck does. Tractor-trailers filled with 60-80 kilograms of hydrogen would have an estimated range of about 750 miles. But getting those long-haul trucks on the road will require a fast filling time. A trucker can refuel a current rig with diesel in about 5-10 minutes.

The U.S. Department of Energy (DOE) last year established targets for refueling a Class 8 truck (the biggest of the big rigs and weighing at least 33,001 pounds). The goal is 8 kilograms of hydrogen a minute by 2030, and 10 kilograms a minute by 2050. A kilogram of hydrogen contains the energy equivalent to that in a gallon of gasoline.

While the process of filling a car with gasoline or a truck with diesel is the same, one key difference emerges with hydrogen fueling. Gasoline, of course, is a liquid that can go straight from the pump into the car. For fueling fuel cell cars, hydrogen is compressed, stored, and then precooled for dispensing at extremely cold temperatures—minus 40 degrees Celsius―because the hydrogen heats up as it is dispensed into a fuel tank.

NREL’s Energy Systems Integration Facility (ESIF) holds a supercomputer that allows researchers to run simulations of hydrogen fueling scenarios. The building also is home to an electrolyzer that produces hydrogen by splitting water, storage tanks of hydrogen, and a fueling station that so far has only been used for cars. There will not be any 18-wheelers pulling up to the hydrogen pump, though; no commercial fuel cell trucks exist yet.

Well-known names in transportation and fuels including Toyota, Honda, Shell, and Air Liquide are partnering at NREL, with a financial split funding the research between the companies and DOE. The Department of Energy’s Energy Efficiency and Renewable Energy Office, through the Hydrogen and Fuel Cell Technologies Office, has made research into hydrogen a priority with its [email protected] initiative and has invested into a number of new uses for the gas.

NREL has become internationally known for its hydrogen research. All of the manufacturers of commercial hydrogen-fueled vehicles have fueled at the laboratory. NREL researchers also play a role in a collaborative effort involving several California agencies.

Wipke, a mechanical engineer who joined NREL 27 years ago, has spent the past 17 years investigating hydrogen fueling infrastructure. The laboratory had begun making hydrogen with electrolysis, storing it in tanks, and turning it into electricity. “I said, if we’re storing hydrogen, we should be fueling a car. We should have a car on site,” he said. “I knew that if you can actually get someone behind a wheel or inside a fuel cell car, everything would make sense for them.”

With a hydrogen-fueled car on campus, NREL expanded its work into the area. The addition of ESIF in 2013 included the purpose-built hydrogen infrastructure research facility, which offered an integrated system for fueling vehicles and tracking how the infrastructure performed. One experiment involved a robot that tested the reliability of the hose  from which the hydrogen flowed into a car. NREL scientists also helped develop the Hydrogen Station Equipment Performance Device, which accelerated the opening of fueling stations in California by verifying their compliance with required safety and fueling protocols.

How soon the driver of a hydrogen-fueled car will be able to make it across the country remains “the million-dollar question,” Wipke said. In the short term, he expects limited hydrogen corridors to open allowing motorists to travel east to Nevada or north to Oregon and Washington. Further than that may depend on the success of an Arizona startup called Nikola Motor Company.

The company, which has received funding from the Department of Energy, is developing heavy-duty hydrogen fuel cell trucks for the American market and said it has taken orders for about 14,000 semis to date. The trucks are not expected to be available until late 2022. But the company’s business model relies on also opening hydrogen fueling stations across the country to make using the trucks feasible. Nikola forecasts it will have 700 stations open by 2028.

“It might be that to drive from New York to California, you might fuel your car at a bunch of truck stops,” Wipke said. “That might be the first network.”

Driving into the chicken-or-egg problem

NREL researchers last year highlighted the which-comes-first explanation over why hydrogen has not made major inroads into the transportation market. In a paper published in the International Journal of Hydrogen Energy, they noted some experts believe the fueling infrastructure is needed first to enable the sales of vehicles. Others maintain the sale of vehicles will drive investments in fueling stations. What both sides agree on is that “building hydrogen infrastructure should take place in parallel with the efforts made to commercialize and reduce the price of the fuel cell vehicles.”

Reducing the price will require the scale-up of two important steps: the manufacturing of components such as the hydrogen tanks and the fuel cells, and the hydrogen supply chain, reported the industry-led Hydrogen Council in January. The organization predicted those steps would reduce the cost of owning a heavy-duty truck by 50% over the next decade.

Component failure rates at fueling stations aggravated drivers at retail hydrogen stations, particularly in the early days, according to NREL research published in January in the journal Reliability Engineering & System Safety. The problems have largely been solved, but hydrogen stations still are not as reliable as gas stations.

One issue NREL researchers are working to improve is the fuel nozzle sometimes freezes onto the car. That happens because the hydrogen is cooled to minus 40 degrees Celsius and can cause frost to form on the nozzle. The frost can turn to ice, especially after back-to-back fills. Colorado air is dry, so the laboratory created an experimental box to encase its hydrogen pump, simulating a humid environment to determine what conditions could cause the freeze. Manufacturers have sent sample nozzles to NREL to see if that solves the freezing problem.

“That’s kind of the enabling technology we’re continuing to develop here at NREL where we can show not only what the problem is but validate and verify when the problem has been solved,” Wipke said.

Hydrogen research at NREL covers many areas such as production, compression, storage, and reliability.

“We take on research that crosses typical boundaries,” said Jennifer Kurtz, chief research engineer in NREL’s Mechanical and Thermal Engineering Sciences directorate. “That may be research where, for example, we’re controlling the operating conditions of fueling, but we are also factoring in system performance capabilities and tracking things like reliability all the while. We’re able to get more out of one set of experiments because we have a fully integrated system.” 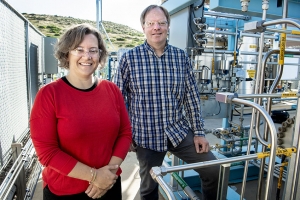 The bigger challenge is still to come, that of figuring out how to handle a steady stream of big rigs requiring hydrogen.

“There is no consensus right now in the industry,” Kurtz said. “We are at the forefront of this research. The fill rate, the amount, the pressures, temperature—none of those things are defined. But we need to get there.”

Just as they did for the laboratory’s custom-built hydrogen vehicle simulator—using rows of hydrogen fuel tanks in a rack on wheels to simulate five fuel cell electric vehicles―the researchers will construct a new simulator with multiple giant cigar-shaped tanks intended for use in a heavy-duty truck. Highly instrumented, these vehicle simulators will provide the data necessary to model how to safely fill a fuel cell truck in the future.

“You have to basically design these systems to be able to operate in Arizona, in the desert in the middle of summer, or North Dakota in the middle of winter, and those are very different conditions,” said Michael Peters, an NREL engineer involved with hydrogen production and infrastructure research.

The testing will begin this summer. NREL produces its own hydrogen, using renewable energy to split water into its component elements, but the hydrogen storage on hand is not enough. Before any work begins on fueling big trucks, the laboratory will triple the amount of its high-pressure hydrogen storage, providing enough hydrogen for two or three heavy-duty fills a day. NREL researchers will target reaching an initial fill rate of 10 kilograms a minute this year.

In addition to determining the best way to rapidly fuel a heavy-duty truck with hydrogen, the NREL research will examine the implications of repeated fueling. In the real world, trucks make fueling stops and fill up either one after the other or simultaneously.

“We’re seeing what the next step is for our research capability,” Kurtz said, “and it is really important for us to learn from the light-duty infrastructure research that we’ve done. We’re definitely at the forefront of this research space and have some exciting projects coming in the next 12 months.”

This article originally appeared on the NREL website. H2 View has republished it with the NREL’s permission.