Ørsted has today (Jan 12) confirmed that it will acquire a 45% ownership share of Liquid Wind AB’s FlagshipONE project, which will produce eMethonal from captured carbon dioxide and green hydrogen.

Located in Örnsköldsvik, the north of Sweden, the plant has potential to become the world’s first large-scale sustainable e-methanol project, decarbonising the maritime sector with its liquid carbon neutral fuel.

It is hoped the site will produce 50,000 tonnes of eMethonal annually starting in 2024.

To utilise this fuel, the project will now have access to Ørsted’s growing hydrogen and power-to-x project pipeline, which includes several projects aimed at decarbonising maritime transportation.

Martin Neubert, Chief Commercial Officer and Deputy Group CEO of Ørsted, said, “Ørsted has set the clear strategic ambition of building a global leadership position within renewable hydrogen and green fuels, and our investment in FlagshipONE is a clear proof of our commitment to this ambition.

“Like we did with offshore wind, we are at Ørsted ready to be a driving force in maturing the green fuels industry, where we can play a significant role in decarbonising hard-to-abate sectors like maritime transport.”

Claes Fredriksson, CEO and Founder of Liquid Wind, added, “We are extremely pleased with the opportunity of engaging in a partnership with Ørsted, a global sustainability leader recognising e-methanol as a replacement for today’s marine fossil fuels.

“The interest from Ørsted shows how far Liquid Wind has come and is further evidence for the importance of electro-fuel. Our green fuel will become a dominant fuel for true decarbonisation in the hard to abate shipping sectors, reducing CO2 emissions with more than 90 %.

“FlagshipONE is the first facility, and it’s Liquid Wind’s ambition to significantly scale up the number of facilities across the world by 2050.” 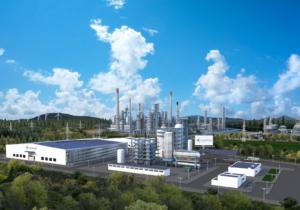 Converting electricity to hydrogen is the biggest opportunity we have as a society to enable large-scale renewable electrification and the reduction of carbon emissions, says renewable energy expert and entrepreneur Claes Fredriksson.