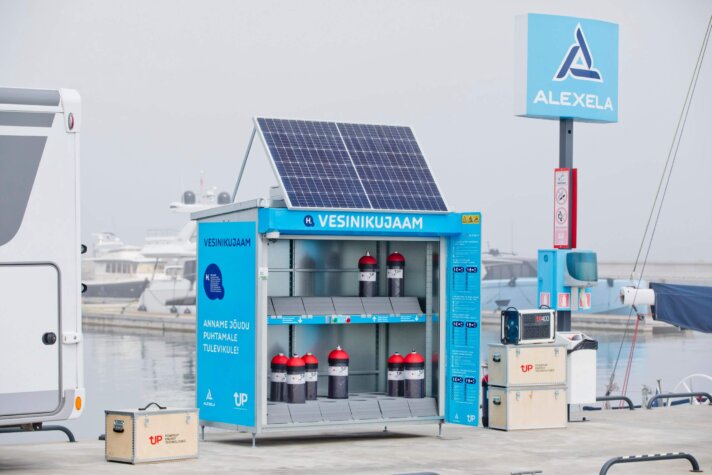 Dr. Ivar Kruusenberg, the Founder and CEO of PowerUP Energy Technologies, has big ambitions for hydrogen cabinets. “We’re planning to open more cabinets not only in Estonia, but in Finland, Sweden, France and maybe in England. This is one of the first steps: to open this [Estonia’s] first, see how it works and then get the next cabinets opened as well, hopefully this year.”

The start-up company said the new hydrogen cabinet, situated at Alexela’s refuelling station at the Kakumäe harbour in Tallinn, Estonia, is a first-of-its-kind, and is targeted towards small application users including sailing boats, yachts and campervans.

The smart cabinet is fully automated and filled with lightweight hydrogen cylinders that have been supplied by PowerUP Energy Technologies. With minimal human contact, the smart cabinets will be operated by a mobile payment system application called Paytailor which makes mobile payments easy for its customers.

The launch of the pilot hydrogen smart cabinet in Estonia is a simple and cost-effective solution to hydrogen distribution and based on the response from the customers in Estonia, it is planned to be duplicated in other European countries as well.

H2 View spoke to Dr. Ivar Kruusenberg to learn more about the hydrogen cabinets and how the technology could support hydrogen development in Estonia.

Thank you for giving H2 View your time. Could you tell us just a little bit about PowerUP Energy Technologies and how it fits into the hydrogen space?

Ivar Kruusenberg (IK): We are a company that manufactures small, portable hydrogen fuel cell based electric generators and these are a perfect replacement for diesel generators. If diesel isn’t going to be available, what will customers do? There’s no other way to go and our products are going to be there to support the transition.

We really expect these hydrogen fuel cell based electric generators to replace, step by step, currently available diesel generators. There’s a lot of advantages. These are maintenance free because there’s no moving parts because of the fuel cells. There’s no emission other than just the pure water and so it is a really wonderful technology in that sense.

We’re also working on how to get hydrogen, with these hydrogen cabinets, so that the customers could still get the fuel as this has been the biggest market barrier. This is still the biggest market barrier because for the customers, it’s really hard to get hydrogen tanks or the generators. We’re trying to figure out all of that and we are making progress in that regard. In a couple of years, we really expect to flood the market with the hydrogen fuel cell based electric generators.

There’s no emission other than just the pure water and so it is a really wonderful technology in that sense.

IK: The hydrogen cabinet is similar to common propane tank cabinets which, I think, associates with car refilling stations where you can exchange your propane tanks, for example. This is the first one which is fully automated. This means that the door to the cabinet will open with a special payment through a smart app.

For example, you pay online, and the doors open, following that you can get your tank. I believe it’s one of the first in Europe for the hydrogen with finding hydrogen and smaller tanks extremely difficult. I know a French company has been trying to do that for bicycle’s but for tanks, which are between seven and 12 litres but there’s currently nothing available right now on the market.

This is first one of a kind and its quite high tech in the sense that it has the solar panels to power itself up. It uses up the power to open the door and then you can get the hydrogen tank. We can say it’s the first hydrogen tank exchange cabinet for regular customers.

Where did this collaboration actually come from?

It was quite practical coming up with the idea because we are already producing hydrogen fuel cell based electric generators. We have a number of customers that are sailors and also use camping cars and so on. They explained that they have a major issue of getting hydrogen tanks to exchange. So far, they were getting these from us, exchanging with us or going to the gas companies but it’s still really difficult to find these.

Because of this, we went to the local gasoline and fuel distributor Alexela, one of the biggest players in the Baltic states, and explained this issue and they responded to make it happen. They explained that together we could deliver hydrogen tanks in a cabinet and open it in one of the marinas where most customers are. This is the solution is incredible.

What do you hope to achieve by setting up the hydrogen cabinet in Estonia? How will it change the whole landscape in the Baltic region?

IK: We’re planning to open more cabinets not only in Estonia, but in Finland, Sweden, France, and maybe in England. Wherever we have the customers that have the issue then we will try to get the cabinet there. We’re starting small but we hope to go big in quite a short time frame. This is one of the first steps: to open this first, see how it works and then get the next cabinets opened as well – hopefully sometime this year.

The second part of this exclusive interview will be released next Wednesday (May 26) and will cover the current Estonian hydrogen climate.