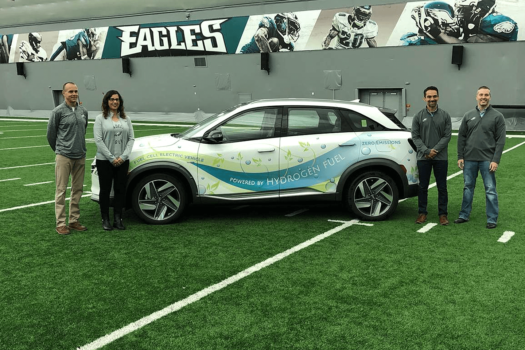 The Eagles have been producing their own clean power onsite since 2013, through the team’s robust Go Green programme.

A micro-grid of 10,456 solar panels have helped generate more than 24 million kilowatt hours, positioning Lincoln Financial Field to be among the greenest major sports facilities in the world.

The stadium will now, in the words of Kareem Afzal, Vice-President of PDC Machines, take the next step forward in sustainability.

The SimpleFuel hydrogen station, which has been designed to take only the inputs of water and electricity to produce clean hydrogen fuel, will power vehicles and material handling equipment in an effort to further reduce the stadium’s carbon footprint.

In a letter to Syed Afzal, President of PDC Machines, Senator Bob Mensch wrote, “I am excited to see that PDC Machines will be equipping Lincoln Financial Field with green hydrogen through a SimpleFuel hydrogen unit.”

“Not only will this partnership aid in the production of clean hydrogen fuel and power vehicles and machines, but it will also work towards the goal of reducing the stadium’s carbon footprint and promoting sustainability.”

“I commend you again for this great accomplishment.”