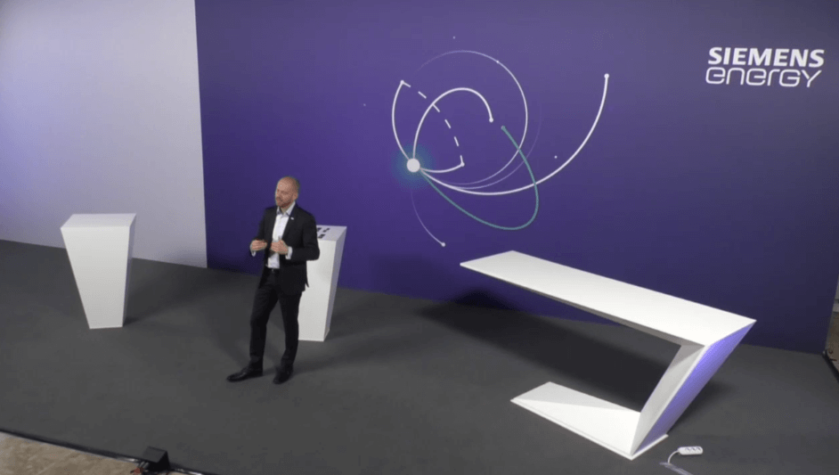 Bruch said there are areas identifiable today where green hydrogen is close to commercialisation.

“Take transport, for example, heavy trucks, trains; they already today can draw up a case under certain conditions that a commercial operation would be possible based on reasonable green hydrogen cost,” he said.

“And then there’s a second bucket, I would say, in these use cases, which are industries which are somewhat able to fence off or regulate where you can give the green hydrogen molecule of value – could be in refining, it could be steel, like defining a green steel element, and it could be other products.”

“And there’s a third bucket of use cases where I would say these are the deep decarbonisation use cases, which are then really at the end of the value chain, that really compete hard against other solutions like electrification, which would probably come at a later stage of the application.”

Bruch said Siemens Energy sees a lot of green hydrogen mobility solutions as reaching commercialisation first, which is why the company is focusing a lot on projects that relate to Power-to-X – converting power into hydrogen and hydrogen into a transportable liquid molecule.

“What I want to flag up here, and I think this is also one task for us today, is to make sure that we understand the perspective and the size of the challenge and the opportunity we have here ahead of us,” Bruch said.

“If you take a 200MW wind farm as an example for producing renewable energy, and we would convert this renewable energy into a green fuel, then out of this 200MW – and this is rough numbers, just to make it understood in terms of the order of magnitude of the different markets – you could produce 200GW hours green fuel, which would be equivalent to 28 million litres of diesel.”

“To put this into perspective, 28 million litres of diesel – this is roughly – if you put it into tons, it’s 0.023 million tons of diesel. And compare this to a fuels market, if you look to Europe, for example, from diesel, gasoline and fuel oil, around 450 million tons.”

“It shows you how massive this transformation is. If you talk about hydrogen, and if you talk about decarbonisation, we have to be aware that we are talking about the biggest investment programme since the industrialisation. It will be massive what we will be seeing, and this is why the solutions corridor also will be so diverse, and why we will need all these different type of technologies – be it electrification, interim solutions or hydrogen. It’s obviously a massive amount of change which is required in today’s system.”

“If you have done it and if you have produced it, with 200MW of wind farm, you can already get a road transport of nine million kilometres of mileage on the air traffic and so forth. So the potential is there; it’s massive. And this is obviously now why we’re trying to tackle all the different reference projects we are looking at.”

Read more: Building a green hydrogen economy in the UAE – An interview with Siemens Energy

Producing green hydrogen will require an abundant resource of renewable energy and it will require massive investment into infrastructure, Bruch said.

“But we [Siemens Energy] believe the opportunity to massive, it will not be the only solution, but we want to shape it as a company to be a part of this,” he added.

Bruch highlighted the “massive movement” he has seen in the past month for green hydrogen, where people are recognising “we have to go”.

“We have seen a lot of support programmes across the different governments being announced and being developed. And already, if you look today on existing hydrogen programmes, we are talking about €80bn ($95bn) already in what we would call mature type of projects, investment volume identified,” Bruch said.

“If you take the total programmes until 2030, you’re talking about €300bn ($356.4bn) identified for hydrogen related project to push the agenda forward.”

“Our strong perception is the pandemic has changed the view on climate change and that you need to tackle things boldly, and now. I think one thing we all learnt in the pandemic is you can talk a lot about a problem that might appear at some point in time, but if you don’t tackle it early enough, you pay for it very, very expensively. I think we see the same trend now in climate change.

“We have for decades been talking about climate change. People recognise it does require the effort, that now is the time to get going, if you want really to avoid the massive potential cost which climate change could bring. And this is why I’m very positive on all the [hydrogen] projects which get launched.”

Bruch said Siemens Energy is currently focusing on four areas when it comes to hydrogen:

We are trying to pick the right reference projects to show the use cases which are most close and most logical to commercial application. We are not necessarily chasing the biggest amount of reference projects; we want to choose the right ones, which really demonstrate also on how we have to shape the market conditions to make green hydrogen viable,” he said.

“We are looking at a massive amount of work and the massive transformation of the industry. As I said, this will be the biggest investment programme in the industry since the industrialisation, if you talk about decarbonisation of the industry and of the energy market and so forth. So a partner network will be key on hydrogen, and this is what we are selecting at the moment.”

Bruch continued, “We are also working on methods, how to automate fabrication, how to professionalise the supply chain, how to make sure we really get the supplies and infrastructure in place. We look on it, to make sure that we are ready for the market and how fast the market is going to grow. We can answer it by also increasing our fabrication capacities.”

“We at minimum have to talk about cost reductions of 50%, so this will be massive steps in design and fabrication .”

“There is a lot of ambition about hydrogen, there’s a lot of appetite and big numbers, and people are very keen to say what’s next year. But I want to be very clear, we will see, over the years to come, a lot of technology development still, for example, in electrolysers. If you want to get costs down, systems will look different and we might identify different materials, different designs, different logics which we need to set up. This is a normal process.”