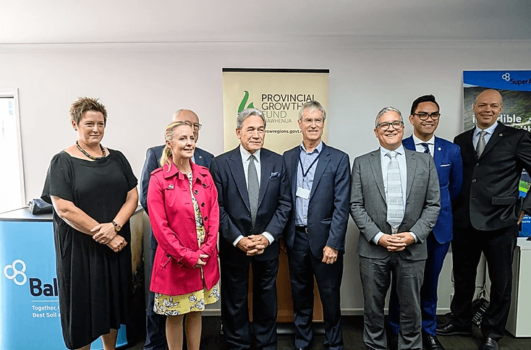 A “game-changing” hydrogen energy facility in South Taranaki, New Zealand has been boosted by nearly $20m of government funding.

The Balance Agri-Nutrients and Hiringa Energy joint venture will see green hydrogen produced from renewable electricity and water at a facility in Kapuni, South Taranaki.

The green hydrogen produced will then be used to power the Ballance Agri-Nutrients’ Kapuni plant.

The $50m project has the potential to be a catalyst for New Zealand’s transition to a sustainable, hydrogen-based transport network.

“This initiative is expected to attract significant investment from industries interested in New Zealand green hydrogen and to be a catalyst for a green hydrogen market and contribute to major growth through the Taranaki region and nationally,” Deputy Prime Minister Winston Peters said.

“In the future, green hydrogen produced by these sorts of projects could fuel our heavy transport industry.”

This investment comes from a $40m commitment from the Provincial Growth Fund (PGF) to support renewable energy projects.

The PGF investment will enable the project partners to accelerate the construction of industrial scale hydrogen from an electrolyser.

The electrolyser will be powered by four large wind turbines close to Ballance Agri-Nutrients’ ammonia-urea plant in Kapuni.

The installed wind generation capacity of at least 16MW, will also supply renewable electricity directly to the plant.

The green hydrogen will be used as both feedstock into the ammonia-urea plant to reduce the plant’s environmental footprint, and as a zero-emission transport fuel.

“Ballance and Hiringa connected at a Venture Taranaki event a number of years back, and it quickly became apparent that both organisations were interested in and committed to developing green hydrogen solutions as part of a low-emissions future,” Mark Wynne, CEO of Balance Agri-Nutrients, said.

“It was a real meeting of the minds. We first conceived the project back in 2017 – and it very much reflects our shared commitment to exploring and transitioning to renewable energy sources.”

Hiringa is developing a hydrogen refuelling network across New Zealand focussed on decarbonising commercial and heavy vehicle fleets. This project will provide a key green hydrogen supply for network expansion.