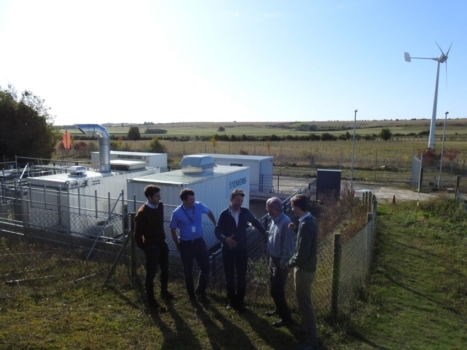 A project supported by Science & Technologies Facilities Council (STFC) investigating how ammonia can be used to make hydrogen a sustainable energy source has been awarded £250,000 in government funding.

The STFC, Ecuity, Engie and Siemens partnership secured the funding as part of the Department for Business, Energy and Industrial Strategy (BEIS) Hydrogen Supply Competition. The partnership aims to help the UK reduce the use of carbon in the country’s energy system in order to help achieve its net zero carbon emissions target.

STFC has been working with partners to produce the world’s first demonstration of using ammonia to store renewable energy. The project brought together cutting edge catalyst technology developed by STFC, engineering capability from Engie, green ammonia expertise from Siemens and market analysis from Ecuity.

STFC Mechanical Engineer Tristan Davenne said, “The funding received from this BEIS Hydrogen Supply Competition has allowed STFC to draw on multi-disciplinary expertise in catalysis and mechanical engineering to design a novel and efficient ammonia cracker. This can be integrated with the green ammonia plant and used to demonstrate the production of green hydrogen from ammonia.”