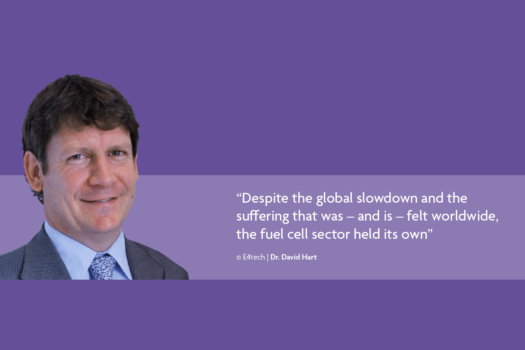 Still the decade of the fuel cell?

2020 is not a year many of us will want to remember. But the start of the ‘decade of the fuel cell’ did show promise, and may have had some unexpected upsides.

Despite the global slowdown and the suffering that was – and is – felt worldwide, the fuel cell sector held its own. It even grew slightly. The need for clean air, climate resilience and sustainable industries was brought into even sharper focus by the real fragility we saw in the global economy, and companies and governments tried to make sense of where to go next. They embraced hydrogen energy, and with it fuel cells. Still, supply chain delays and business uncertainty held the industry back from the growth we had anticipated 12 months ago.

At E4tech, our latest Fuel Cell Industry Review shows that in simple figures the industry grew in 2020 by nearly 14% in terms of units shipped, and 8% in MW. That’s about 10,000 units and 100 MW over 2019. Asia dominated both. Japan’s market for residential fuel cell CHP continues to be stable, with perhaps 47,000 units added. and Korea is pushing hard on its hydrogen economy pledge, seeing 8,500 Hyundai NEXOs plus stationary fuel cell units from Doosan and Bloom Energy in particular. Fittingly, these are increasingly powered by hydrogen. While Hyundai’s sales were up, Toyota sold fewer cars last year, but it diversified activities dramatically, including truck developments with Hino, the Energy Observer Developments partnership, and module supply to players like Caetano bus in Portugal. Toyota sales should pick up again with the new Mirai. Hyundai has taken similar steps to broaden its reach, including shipping its first Xcient trucks to Switzerland, and it’s clear that the future is by no means all about cars. In trucks, Hyundai and Toyota are joined by the new Daimler-Volvo joint venture, by CNH and MAN, and by new entrant Hyzon. Buses remain a strong presence, and maritime units increasingly so. Ballard has even opened a Danish business specialising in marine solutions.

As important as the numbers are, the real developments in the last 12 months were the manufacturing facilities and the partnerships. Weichai built a factory for 20,000 units per year; ElringKlinger aims for 10,000 per year. Bosch is building production lines for fuel cells using Ceres’ SOFC technology, aiming for 200MW per annum by 2024. Plug Power continued its evolution from forklift specialist to hydrogen economy player by buying electrolyser company Giner, and United Hydrogen, which has storage solutions intended for aircraft. It then announced a $1.6bn deal with Korea’s SK, looking to build gigafactories. Airbus announced a long-term partnership with ElringKlinger to develop fuel cells for aircraft, and unveiled three hydrogen-based designs. Commodities trader Trafigura, perhaps not an obvious player in the sector, invested in H2 Energy of Switzerland to help it finance and roll out hydrogen solutions for trucks. Total Ventures invested in Hyzon, though GM pulled back from Nikola at the last minute, as it became clear that the latter did not have all of the solutions it claimed to have. GM will nevertheless work with Nikola to integrate its fuel cell systems into the company’s North American trucks. And Hyzon pulled off the largest deal so far, merging with a SPAC and achieving a pro-forma valuation of $2.7bn. Hyzon should get something like $570m in funding towards its ambitious growth plans.