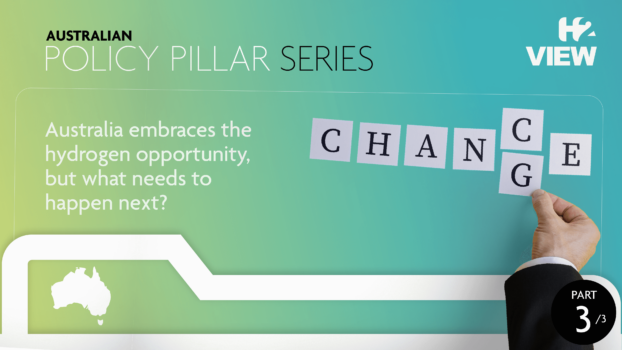 The Policy Pillar – Australia: It’s full steam ahead for Australia as it embraces the hydrogen opportunity

He previously hailed it the hero fuel in Australia’s quest to reduce emissions and combat the effects of climate change, and in part one of this series Dr. Alan Finkel highlighted how hydrogen is in transition from being an exotic fuel to becoming a commodity like petrol.

In part two of this series, we heard from industry how Australia has “caught hydrogen fever”. Sean Blythe, CEO of ENGV, responsible for Australia’s first public hydrogen refuelling station, said, “Everyone is gripped. Not only do we have a well-considered national strategy and a clear roadmap, but each state is also vying to be the primary producer and exporter of renewable hydrogen, so they’re all funding major projects.”

And Blythe is right, Australia is embracing the hydrogen opportunity with both hands. The Australian Government has committed more than a billion dollars specifically for hydrogen, with the path to achieving ‘H2 under 2’ – the point where hydrogen becomes competitive with conventional fuels – set out in the 2019 National Hydrogen Strategy. Australia is one of the first countries to publish a strategy outlining the actions needed to support hydrogen industry growth.

Hydrogen is also one of five priority low emission technologies identified under the Australian Government’s Technology Investment Roadmap. And the Australian Government is working with state and territory governments to review the nation’s legal frameworks, to determine what reforms may be needed to support a safe and efficient clean hydrogen industry. This includes accelerating regulations for the blending of hydrogen into domestic gas networks, with trials already underway in parts of Australia.