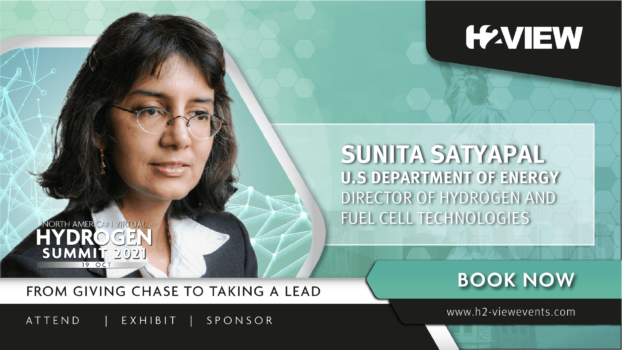 This is such a historic time for hydrogen, says Sunita Satyapal as she opens H2 View’s North American Virtual Hydrogen Summit

Any approach that can get the US to its ‘1 1 1’ target – reducing the cost of clean hydrogen by 80% to $1 per 1kg in 1 decade – is “on the table”, said Sunita Satyapal as she just opened H2 View’s North American Virtual Hydrogen Summit.

“We’re at $1.50 today with natural gas; we see estimates for potential for less than $2, so this is a really major effort here that we have launched. And the goal is to look at all pathways of how we can get down to $1,” the Director of the US Department of Energy’s Hydrogen and Fuel Cell Technologies Office within the Office of Energy Efficiency and Renewable Energy (EERE), continued.

Satyapal was talking about the US DOE’s Hydrogen Shot, which sets an ambitious, but achievable, cost target to accelerate innovations and spur demand of clean hydrogen.

It was launched in June following a request from President Joe Biden to US Energy Secretary Jennifer Granholm in which he asked to “speed the development of critical technologies to tackle the climate crisis”.