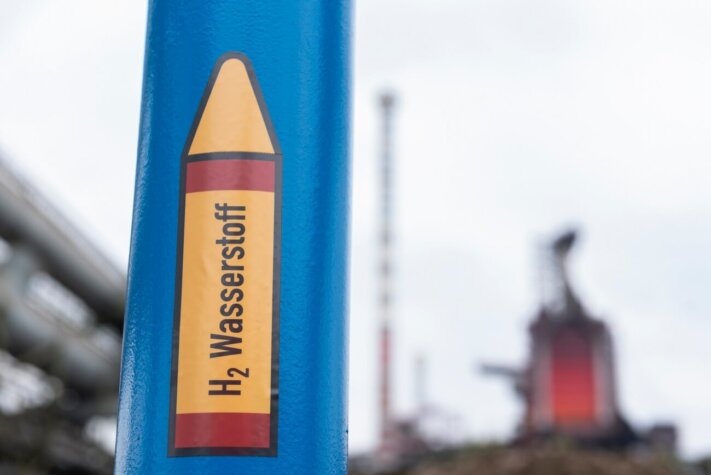 thyssenkrupp Steel has successfully completed the first phase of hydrogen tests on Blast Furnace 9 in Duisburg, Germany, and can now transfer its technology for large-scale industrial use.

In an announcement released today (3rd Feb), the company said it has gained important findings in its recent assessments, enabling it to extend the trials to all tuyères in the next step.

A particular focus of the first test phase was on findings on plant technology with the use of hydrogen. With this in mind, injection of hydrogen was tested on one of the 28 tuyères of “Blast furnace 9” at the Duisburg site.

Based on continual data collection and analyses during the 24-hour tests, the team was able to gather information on the positioning of the hydrogen lance in the furnace, on flow and pressure conditions and on the interaction between elevated temperatures and plant technology.

The collected data was used to optimise the hydrogen technology with each trial. It was also possible to reach the envisaged injection volume of about 1,000m³ of hydrogen per hour in the tests.

Funded under the IN4climate.NRW initiative launched by the state government, the project is scientifically supported by the BFI research institute and supplied with hydrogen by Air Liquide.

Commenting on its success, Dr. Arnd Köfler, Chief Technology Officer of thyssenkrupp Steel, said, “The development of the hydrogen technology at blast furnace 9 is an important step in our transformation towards climate-neutral steel production. That way, we are able to reduce the CO2 emissions of the conventional coal-based blast furnace process significantly.”

“We are very grateful to the state of North Rhine-Westphalia for funding this first trial phase, which has laid the foundations for the second phase now to come. This will then be followed by the next decisive step towards climate neutrality: The construction of direct reduction plants, which are purely hydrogen-based and can be operated completely without coal.”

In the second test phase, the tests will be extended to all 28 tuyères of the blast furnace, paving the way for large-scale industrial use. The focus of research will be on the impact of hydrogen technology on the metallurgical processes in the blast furnace.

Scheduled to start in 2022, the Federal Government has held out the prospect of funding for the second phase as part of the real-world laboratory program.

In a recent development for the second phase, a preparatory agreement on the supply of hydrogen to the blast furnace via Air Liquide’s long-distance pipelines has been concluded.

Gilles Le Van, Chairman of the Management Board of Air Liquide Germany, said, “thyssenkrupp, and Air Liquide are working together on a lighthouse project for the hydrogen society. Together we are pushing forward the decarbonisation of steelmaking – with the aim of equally addressing climate protection and international competitiveness.”

“This is important for North Rhine-Westphalia, for Germany and Europe, and we are proud to make our contribution. Air Liquide brings more than 50 years of experience in the field of hydrogen to our joint project work with thyssenkrupp. We’ll build on that”.