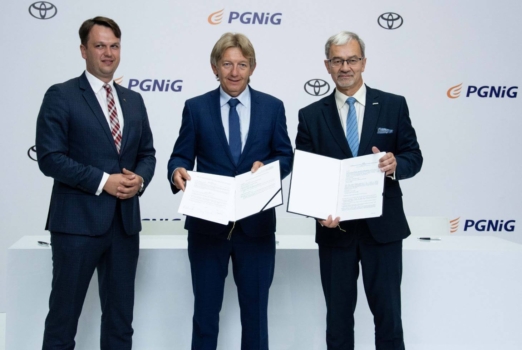 Toyota and PGNiG to advance hydrogen technologies in Poland

Announced today, the agreement intends to introduce hydrogen as a clean fuel for zero emission fuel cell vehicles in the Polish market and will see the construction of a hydrogen refuelling station.

Jerzy Kwieciński, President of the PGNiG Management Board, said, “The launch of a pilot hydrogen refuelling station will be PGNiG’s first step in the implementation of the Group’s hydrogen programme.”

“In testing the station, we will work with Toyota, a partner with a strong reputation in the automotive industry and a leading manufacturer of hydrogen-powered vehicles. I am confident this partnership will contribute to successful advancement of the hydrogen fuel market in Poland.”

The partnership further expands on PGNiG’s already made hydrogen efforts. In May, the company unveiled its hydrogen research programme with provides for the production of hydrogen, including green hydrogen using renewable sources, hydrogen storage and distribution, and industrial applications.

Jacek Pawlak, President of Toyota Motor Poland and Toyota Central Europe, added, In the automotive industry, we are currently dealing with a revolution, and Toyota as a global brand has been supporting the development of the entire sector for years, including by sharing patents.”

“As Toyota Motor Poland, we have been one of the leaders in innovation and electromobility for years. We are glad that we will work with PGNiG as our partner to make the most effective use of hydrogen at all stages.”