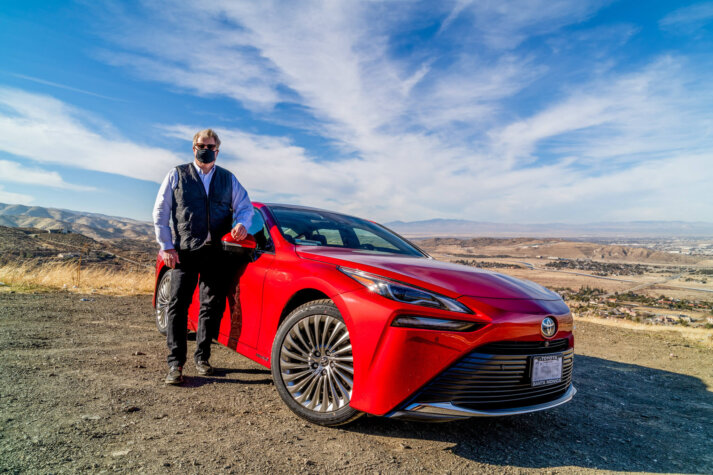 Toyota’s 2021 Mirai has made its debut in the City of Lancaster, California, which is aiming to become the US’ first hydrogen city.

The vehicles arrival in Lancaster is a result of Lex Heslin, Senior Project Developer at Hitachi Zosen Inova, being the first of a lucky handful of motorists to take delivery of the Mirari.

Currently working with the City of Lancaster to advance its plans to become its hydrogen city plans and expand the hydrogen electric vehicle market, Heslin was ecstatic about the arrival.

“The Mirari is proof that hydrogen works. It has a much longer range than any of the current electric vehicles and takes only minutes to fill up compared to charging batteries, which can take hours,” he said.

The latest model of Mirari, which means “future” in Japanese, is built on the rear-wheel drive GA-L platform of the larger Lexus LS sedan, allowing for increased hydrogen storage.

Due to the increased storage, the car’s Environmental Protection Agency’s (EPA)-estimated range to over 300, a 30% increase over the first-generation front-wheel drive Mirai.

In addition to storage solution, the fuel cell system has also been redesigned to offer more power delivered to the 20-inch alloy wheels.

A pioneer in green energy for over a decade, Lancaster’s Mayor Rex Parris, said, “Our current energy alternatives are not enough to reach our goals.”

“We see hydrogen as a viable solution that will reduce carbon emissions not only for our residents but everyone – improving the air we breathe, providing secure and reliable energy, and creating skilled jobs within the industry.”

As members of the California Fuel Cell Partnership, the City of Lancaster collaborates with partners on activities that advance the technology that is aimed at expanding the market for fuel cell electric vehicles powered by hydrogen to help create a cleaner, more energy-diverse future with no-compromise zero emission vehicles.

In December last year, H2 View spoke exclusively with Mayor Rex Parris to find out more about Lancaster’s plans to run completely on hydrogen within the next five years.