Turn up the heat: A brief history of high-temperature hydrogen fuel cells

In the early 1960s, a cooperative effort between the US Air Force Materials Laboratory, Dupont, and the Celanese Research Company led to a breakthrough: the synthesis and commercialisation of Polybenzimidazoles (PBIs), a class of high-performance polymers recognised for their excellent thermal and chemical stability. It was the Cold War and the US Government was eager to develop materials to aid in the “Space Race” and it found it in “m-PBI”, one of the first PBIs to be widely-investigated.

Because m-PBI is non-flammable, resistant to chemicals, physically stable at high temperatures, and can be spun into fibers, this polymer has been used in astronaut space suits, firefighter’s turnout coats and suits, and high-temperature protective gloves. PBI continues to be used in multiple applications including matrix resins, high strength adhesives, thermal and electrical insulating foams, and thermally-resistant fibers. And, as you might expect, PBI features prominently in hydrogen fuel cell membranes.

Polymer electrolyte membrane (PEM) fuel cells, also known as proton exchange membrane fuel cells (PEMFC), are energy conversion devices that provide energy by converting chemical energy (stored in chemical bonds) into electrical energy. Electricity is produced at the heart of the fuel cell by the membrane electrode assembly (MEA), and component that is comprised of a proton exchange membrane sandwiched between two electrodes. Fuelled by hydrogen, a metal catalyst at the anode splits the hydrogen into protons nad electrons. As the protons are transported through the proton exchange membrane to the cathode, the electrons provide electrical work by travelling around the membrane through an external circuit from the anode to the cathode. The protons and electrons react with an oxidant (typically air from the atmosphere) at the cathode to form water, thereby completing the electrochemical cycle. Hydrogen gas is commonly used as a fuel source for the cells, but other fuels such as methane, methanol, ethanol and dimethyl ether have been explored. Figure 1 below shows the basic workings of the fuel cell. 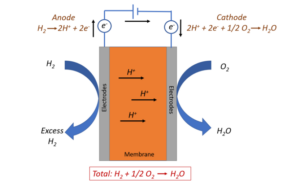 Fuel cells use a variety of different catalysts, electrodes, membranes, and dopants, each of which function under specific operating conditions. Cells that use low boiling membrane dopants, such as water and are called low temperature PEM fuel cells (LTPEM) operate at approximately 60-80˚C to avoid vaporization of the proton transfer agent. Consequently, the system complexity is increased as extra componenets and controls are required to ensure that the membrane remains completely hydrated during operation. Moreover, cell operation at such low temperatures allows trace amounts of reformate byproducts, especially carbon monoxide, to bind to the catalyst. These highly-competitive, non-reversible reactions “poison” the catalyst, thereby decreasing and possibly terminating the functionality of the fuel cell. Therefore, low temperature fuel cells require an extremely pure fuel source.