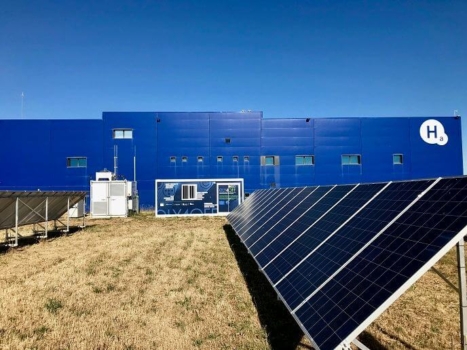 To overcome this challenge, renewables must be supplemented with energy sources that can instantly fill the gaps in energy supply and demand.

The energy surplus is used to power electrolysis, a process that separates water into its constituents: hydrogen and oxygen.

Diesel generators are currently one of the most common off-grid solutions to backup solar power.

However, these generators release large amounts of carbon dioxide, nitrogen oxide and other harmful emissions into the atmosphere. What’s more, operating costs are largely affected by the volatile diesel market.

“Batteries could be another option of storing solar energy for later use, but they would need to be giant to manage seasonal variations,” said Pedro Casero, coordinator of the EU-funded ELY4OFF project.

“Besides being run by zero-carbon renewable electricity, electrolysis can manage both short and long-term transient variations in renewable supply.”

Overall, the hybrid system works at high efficiency at any load, producing high-purity hydrogen for any use.

All of these are possible thanks to a reliable control and communication system that allows safe, robust and energy-efficient operation.

The project boasts the development of a novel connection system between the power source and the PEM electrolyser.

Depending on the load, current solutions that rely on the combined use of a rectifier and an inverter demonstrate a maximum efficiency of around 92%. ELY4OFF’s solution reached impressive efficiency values, as much as 97.4%.