Renewable energy infrastructure now under development at the Western Energy Hub in Millard County, Utah can be integral in helping Los Angeles and California achieve their goals of 100% zero-carbon electricity, according to a white paper published by the Advanced Power and Energy Program (APEP) at the University of California, Irvine. 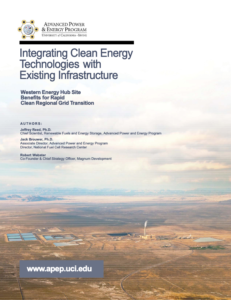 The paper builds on over a decade of research at APEP regarding the role of renewable hydrogen and related solutions as key enablers of a future economy served by 100% renewable and zero-carbon electricity.

As detailed in the paper Integrating Clean Energy Technologies with Existing Infrastructure, the Western Energy Hub, near Delta, Utah, sits atop the only known utility-scale ‘Gulf Coast’-style salt dome in the western US, capable of storing gases, including hydrogen and compressed air, that can be drawn upon efficiently and economically to meet variable power requirements.

For example, power from renewable sources can be stored as hydrogen and later returned to the grid as electricity in a variety of ways, including as a carbon-free fuel for combined-cycle turbines such as those that will be installed at the adjacent Intermountain Power Project for startup in 2025.