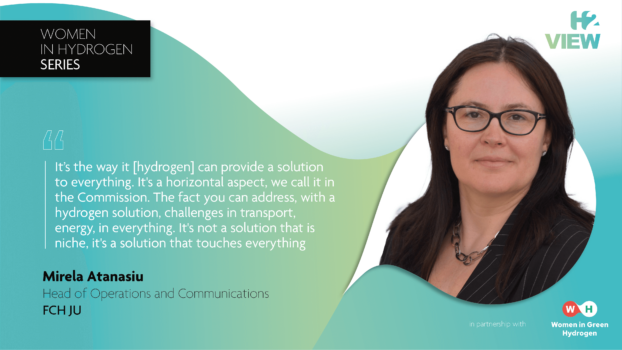 This story is part of H2 View’s monthly Women in Hydrogen series, created in partnership with the Women in Green Hydrogen (WiGH) network, which profiles women in the hydrogen industry. This month’s interview is with Mirela Atanasiu, Head of Operations and Communications at FCH JU.

Mirela, you’ve been with the FCH JU since 2010 and before that you worked in the hydrogen space for the European Commission. Could you start by telling us a bit about your career and your background in hydrogen?

To start from the beginning, I’m a chemical engineer and economist, so I have two degrees. I always liked chemistry and I wanted to have a career in that, but then later I realised the economical part. I studied the part of the economy that helps me with an engineering background. So it’s more economical forecasts, macroeconomic analysis and economic system dynamics. This part of the economy helps me understand the business models behind any project, for example.

I started my career as a researcher on fossil fuels at the time, but looking at a reduction of carbon dioxide, carbon capture and sequestration (CCS). This is how I learnt about hydrogen and in that role, that’s how I got my first experience of working with the European Commission as an expert, evaluating proposals on research and innovation. I think I did a good job because they offered me a job here!