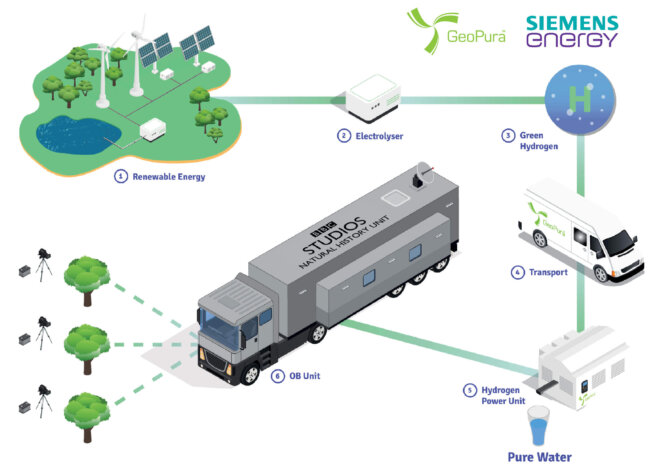 An entire episode of BBC Studios Natural History Unit’s Winterwatch was powered by a hydrogen power unit and energy saving batteries last night (26th Jan), making TV history in the UK as the world’s first large-scale outside broadcast unit to be powered by green hydrogen.

The milestone achievement announced today (27th Jan) is the result of a partnership between GeoPura™ and Siemens Energy, which are supplying continuous uninterrupted, emissions free, critical electrical power to BBC Bristol’s outside broadcast unit with a GeoPura™ 250kW hydrogen power unit.

With the unit, GeoPura and Siemens hope to power the Winterwatch programme for a whole two weeks, setting a new standard for broadcasters around the world, demonstrating how uninterrupted critic al power needed to keep live TV production facilities rolling can be delivered without damaging emissions.

In just one day of hydrogen-only powered production, the hydrogen power unit offset around 425kg of CO2 had the same quantity of electricity been produced via a diesel generator.

The unit has been onsite at BBC Bristol outside broadcasting unit since 14th January and will remain onsite until the series finishes on 29th January. The installation uses green hydrogen produced using renewable energy and water electrolysis.

Commenting on the achievement, Andrew Cunningham, GeoPura’s Managing Director, said, “The BBC Studios Natural History Unit and the Winterwatch production team, are to be congratulated for taking their environmental responsibilities seriously, even when it means working with unfamiliar technology in a high-pressure environment.”

“They have clearly demonstrated what’s possible when broadcasters and film makers are determined to ‘walk the talk’ when it comes to improving air quality and significantly reducing their contribution to climate change.”

“The key is to ensure as a society that this behaviour is our habit and not a special case. This is why, working with our partner Siemens Energy, we’re providing our zero emission, clean hydrogen fuelled power solutions around the world to organisations who really want to reduce their reliance on fossil fuel-based power generation systems.”

Steve Scrimshaw, Siemens Energy’s Vice-President UK&I, added, “Reaching net zero in the UK is going to need all parts of the economy to play their part. By powering a live TV broadcast, we continue to show the powerful role hydrogen can play in reaching this goal by displacing high CO2-emitting diesel generators.”

“This latest installation continues to demonstrate the versatility of the GeoPura hydrogen power unit technology which has huge potential to provide an alternative, emissions free option for our energy needs.”