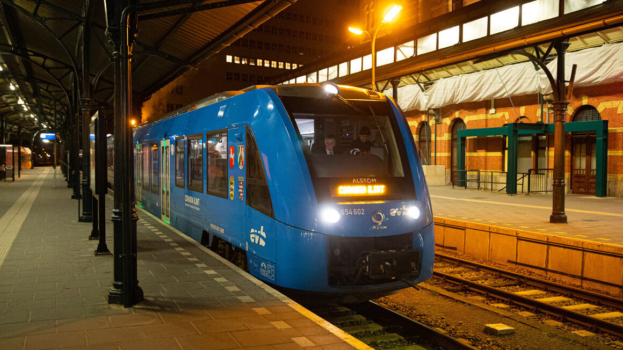 Trials of Alstom’s Coradia iLint hydrogen train in the Netherlands have been deemed a success.

The tests aimed to investigate whether a hydrogen-powered train could be a fully sustainable alternative to the diesel trains currently running in the northern part of the country.

Bernard Belvaux, Managing Director of Alstom Benelux, said, “After Germany, the Netherlands is the second country in Europe where the Alstom’s hydrogen train has proven itself a unique emissions-free solution for non-electrified lines.”

“The tests have demonstrated how our hydrogen train is mature in terms of availability and reliability, providing the same performance as diesel equipment, and with the benefit of low noise and zero emissions.”

Highlighting the positive results, the Province of Groningen published a report outlining the tests performed in March on a 65-kilometre line between Groningen and Leeuwarden in the north of the Netherlands

Released yesterday, the report states that Alstom’s hydrogen train has successfully met the 4 objectives of the test frame: authorisation by the Dutch NSA (National Safety Assessor) to run on the Dutch railway network, fully zero emission and perfectly fitting the commercial service of the current timetable, quick and easy refuelling, and familiarisation of the general public to hydrogen mobility.