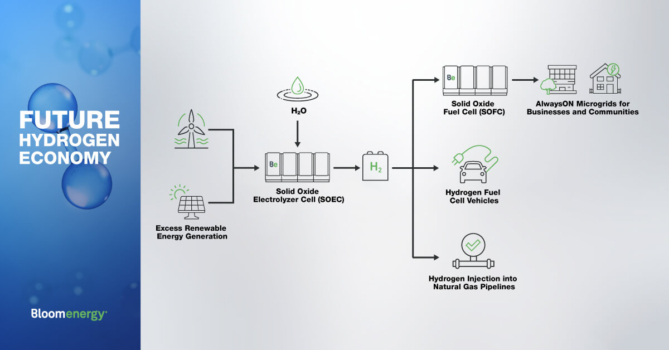 The California-based company said these products will be first introduced to the South Korean market in 2021 through an expanded partnership with SK Engineering and Construction (SK E&C), an affiliate of SK Group.

Bloom’s technologies are critical in enabling South Korea to execute on its government-mandated Hydrogen Economy Roadmap.

“This expansion of our product offering enables zero-carbon electricity and transportation solutions.”

“Innovation and execution are fundamental tenets of our business and we are excited about the opportunity to advance the hydrogen economy with our long-time partner, SK E&C.”

Bloom Energy announced in June 2019 that its fuel cells could run on hydrogen to generate zero-carbon electricity.

By the end of 2020, Bloom expects to ship a 100 kilowatt pilot server to South Korea to power an SK E&C facility in early 2021. The second phase, a 1 MW hydrogen server installation, is targeted for a 2022 deployment.

Both companies have committed to fully fund and resource these two phases.

Jason Ahn, CEO of SK E&C, said, “Given the Korean government’s ambitious directive of deploying 15,000 MW of fuel cells by 2040, we forecast to sell 400 MW per year of fuel cells in the future.”

The Proven Importance of Electrolyzers

Bloom Energy’s core technology is based on research done by its founders on using electricity generated by a solar panel to produce fuel and oxygen on planet Mars for NASA.

Bloom Energy Servers reversed this process by taking in fuel and air to generate electricity. Bloom is capitalising on this technology by taking terrestrial renewable power and producing hydrogen using solid oxide electrolysers.

The renewable hydrogen, when produced in this manner, can fuel cars, power resilient AlwaysON Microgrids, or be injected into natural gas pipelines to reduce carbon emissions.

“The South Korean government’s roadmap requires the construction of 1,200 filling stations to fuel 6.2 million hydrogen cars by 2040. Bloom’s electrolysers would allow SK to play a vital role in helping to meet these targets,” Ahn said.