CaFCP’s Keith Malone on hydrogen, FCEVs and how coronavirus is affecting the market

There’s an ongoing joke in the California Fuel Cell Partnership (CaFCP) office that whatever situation Keith Malone walks into, he’ll eventually find a connection with somebody.

“Three degrees of Keith they call me,” Malone says as he chuckles down the phone.

And they’re not wrong. Malone is well known in the fuel cell and hydrogen space for his work with the CaFCP – an industry/government collaboration aimed at expanding the market for fuel cell electric vehicles (FCEVs) to help create a cleaner, more energy-diverse future with zero emission vehicles.

“It started on my first day on the job  with the partnership’s communications team,” Malone tells H2 View as he continues his story.

“I went to a conference with my colleagues and I dropped by the booth of one of our members and there was a friend of mine from high school. We were surprised to see each other and what was more surprising was the fact that this friend worked closely with the CaFCP.”

“From then began this series of coincidences where I was seeing people that I knew or had a fairly strong connection to. It kind of blew people away, and the joke ‘three degrees of Keith’ was born.”

With a varied background from working in politics with Los Angeles’ Latino community in the late 80s to working in HIV/Aids in the early 90s, Malone joined the CaFCP in 2012.

“In my background I’ve always been attracted to organisations that have an interesting mission and I’ve been very lucky in that I’ve worked in some fascinating areas,” he says.

Here, in an exclusive interview with H2 View, Malone talks more about his role within the CaFCP, gives us his thoughts on what impact coronavirus is having on the hydrogen mobility ecosystem and tells us what it’s like to drive a FCEV.

You just started talking a little about your background and current role. How did you become involved in the hydrogen space?

When I tell my friends, family and others about the work I do and they always say, “Wow, what you do seems so fascinating, how did you find this job?” And I tell them: pure, dumb luck. I think you can easily apply chaos theory to this particular job search – it came out of nowhere.

When I first got this job, it opened my eyes to the energy transition and what is likely to happen. I remember explaining to friends and family, ”You don’t understand what’s happening. So much money is being invested in clean tech here in California.” People are vaguely aware of it, but I don’t think they’ve see the bigger, cumulative picture.

And you’ve worked for the partnership for eight years?

Yes, come May it’ll be eight years. So much has happened and I’ve grown in this job and learned a lot. Keep in mind that I had no background in vehicles, clean air, etc.

About five years ago somebody used the term SME to describe me. I’m not a fan of acronyms and I asked, “What is that?” And they said, “Subject matter expert” and I thought, me? An SME?

“Most people are not familiar with FCEVs and hydrogen, so it’s interesting to see the looks on their faces when they hear about this technology for the first time…”

What are you working on right now for the CaFCP?

Right now, the State of California is seeking input on variety of topics related to hydrogen and fuel cell electric cars, buses and trucks, and we’ve been working with our members to provide input. Plus, I continue my work with social media and keeping our members connected and informed.

What impact is coronavirus having on the hydrogen mobility economy?

More than anything, it means fewer in-person events, conferences and large meetings. Usually, at this time of the year, I’m at conferences or outdoor public events in my shorts and a sunhat standing next to a Clarity, Mirai or NEXO talking to the public.

While many of the partnership’s meetings have always had an online option for participation, we’ve shifted fairly easily to exclusively online meetings.

While we’ve seen some slowing of station rollout, a lot of development activity continues.

I’m seeing lots of quiet indicators that hydrogen and fuel cell industries are planning to move forward. So in some ways some things have slowed a bit, but not as much as meets the eye.

A huge part of the work the CaFCP does is expanding the market for FCEVs. What car are you driving at the moment?

Right now, I’m driving the Hyundai Nexo. I think I’m on my fourth model. I’ve been driving a fuel cell car now for a solid seven years. I’ve driven all of the commercial models. In my job, I’m not supposed to have favourites, but I like all of them. I think each has their strengths. 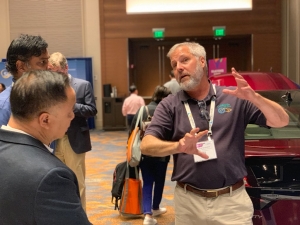 What’s a FCEV like to drive? How would you describe the experience to someone who hasn’t driven one before?

First, I will admit that the car I own is a 1964 Plymouth Valiant. It was given to me by my grandmother when I graduated from college, so I’ve had it for more than 30 years. It has a V-8 engine and a manual transmission. So the switch to a fuel cell car was quite the technological leap, and I can’t imagine going back.

When I’m out at public events, people will walk by the cars and because FCEVs look like a typical sedan or SUV, people aren’t really sure what to think. It requires a little effort to engage them.

They’ll walk past and I’ll point at the car and tell them, “Damn fun car to drive.” Usually, they’ll turn, and I’ll say, “Fuel cell car powered with hydrogen.” And that gets their attention.

Most people are not familiar with FCEVs and hydrogen, so it’s interesting to see the looks on their faces when they hear about this technology for the first time. Their eyes open wide when I talk about filling up in three to five minutes, the range, how a fuel cell works and the performance of the car in general.

I stress how fun and easy it is to drive – just like driving their gasoline car. As an example, I’ll tell them, “You know how I was trained to drive this car? They threw me the keys.” It gets a laugh and I hope it conveys how few behaviour changes are required. I explain that some light training is needed on how to fuel, but it’s very familiar territory: the hydrogen pump is at a gas station, they have apps and online maps to find the stations, etc.

I want them to feel that this car is familiar and easy to drive, that they can drive it like a regular car. When it comes to fuelling, I try to make it sound a little boring.

Most of all, I stress that the experience of driving a fuel cell car goes beyond what you experience in a typical gasoline car. These cars have kick and driving with an electric drive vehicles is a great experience.

What about your personal experience of driving FCEVs?

I live in Los Angeles, the car capital of the world. We have a lot of traffic and a lot of freeways and I tell people I hold my own in traffic with a fuel cell car. Driving here is a challenge at times, and every fuel cell car I’ve driven allows me to keep up and, usually, surpass the performance of a typical gasoline car.

“In the midst of coronavirus, the message is that renewables, including hydrogen, should be part of stimulus packages to help accelerate the energy transition…”

You are well known advocate for hydrogen and fuel cell technology. What messages are you trying to get across in your advocacy at the moment?

I think right now it’s still the message that globally, this is happening. And over the last year several reports and announcements have confirmed what we’ve said for years about the technology and the need to scale up production. The Hydrogen Council’s report is an example, and so is the US Hydrogen Economy Roadmap and the BloombergNEF analysis, and others.

In the midst of coronavirus, the message is that renewables, including hydrogen, should be part of stimulus packages to help accelerate the energy transition. We’re seeing these messages from several sources around the globe. Recently, the International Energy Agency’s Faith Birol called for hydrogen as part of stimulus packages, and, earlier this month, the leaders of several Norwegian companies published an open letter to the government saying now’s the time to invest in hydrogen and position the country to excel in this market globally.

This stimulus message builds on what nearly all of the recent road maps – about 20 as of late – have said: that partnership between government and industry is required to achieve the hydrogen economy. In 2018 CaFCP came out with its 2030 vision, ahead of other road maps. In it, we called for continued partnership with government to create a self-sustaining market, a market that no longer requires government support.

Read more: Behind the wheel: 1,000 hydrogen stations by 2030 is achievable

What’s the CaFCP focusing on this year?

We’re continuing our discussions with the California Energy Commission and the California Air Resources Board about what’s needed to achieve 200 light-duty stations, the next milestone in the growing passenger car fuelling network. And we’re also focused on the fuelling infrastructure that’s needed for buses and trucks.

We’ve laid the foundations with our Fuel Cell Revolution, so it’s really about identifying policies and mechanisms that will help us get to 2030 and achieve that vision of a self-sustaining market.

And we continue to work with our members on car, bus and truck-related issues.

At the same time, stakeholders are working on legislative language to put hydrogen fuel in California a pathway to 100% renewable content. Right now, California requires that at least 33% of hydrogen fuel is renewable and that amount is increasing to 40% under our Low Carbon Fuel Standard capacity credit for ZEV infrastructure.

Read more: FirstElement Fuel: Driving down the cost of hydrogen

Last question, if you could leave our readers with one hydrogen-related message, what would it be?

Ugh, the hardest question! About three years ago, based on the increase in activity I was seeing, I said 2020 would be our year.

At that time, a lot of hydrogen-related plans and reports emerged from around the globe, especially coming out of Europe. In the last year, maybe two, countries and regions began publishing road maps and strategy documents reflecting the growing recognition that hydrogen has a significant role to play while also being an opportunity for economic growth.

And over the last year, several reports and analyses came out, especially the Hydrogen Council report from McKinsey & Company, that showed what is possible and likely.

And throughout all of this came announcement after announcement of new projects and milestones being met or surpassed.

Covid-19 may have slowed or momentarily paused activity in the hydrogen and fuel cell world in 2020, but it hasn’t stopped it. So perhaps I should amend my earlier statement to say that 2021 is our year.