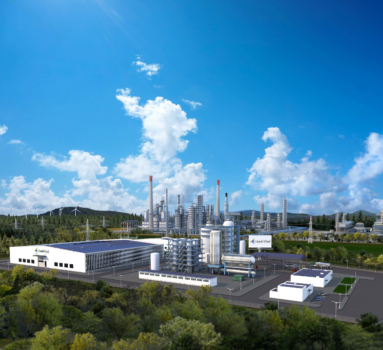 Supported by a €1.7m investment from EIT InnoEnergy, the project is a significant milestone in meeting growing demand for renewable fuels to enable more sustainable transportation.

The facility will capture waste carbon dioxide and combine this with hydrogen, made from renewable electricity and water, to produce renewable methanol, e-methanol.

This versatile, liquid fuel is carbon neutral and easy to store, transport and use, Liquid Wind said.

The process of upcycling waste carbon dioxide for use as a renewable fuel to replace fossil fuels, will prevent the emission of new carbon dioxide.

The fuel provides an ideal solution to reduce carbon emissions, particularly within the marine sector and road transport, which are currently lacking viable, low-carbon fuel options at scale.

The consortium, who intend to develop six facilities across Scandinavia by 2030, is currently designing the technology integration for the first facility and expect to be supplying eMethanol from 2023.

Following the establishment of the first six facilities in Scandinavia, the concept will then be scaled and license internationally.