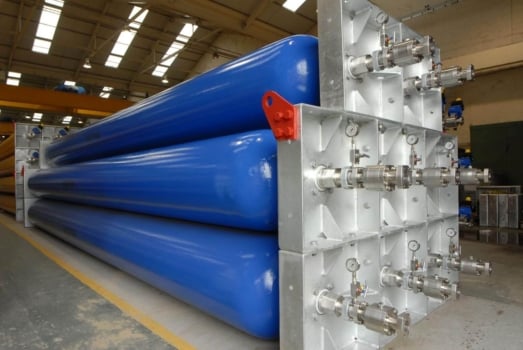 H2 View understands the agreement is for ground storage solutions, with CSC having developed a ‘highly effective’ solution for Shell’s hydrogen storage requirements.

Shell became the first branded fuel retailer to sell hydrogen at one of its retail sites in the UK in 2017, and has since grown its network of hydrogen stations across Europe and North America to encourage the adoption of hydrogen in transport systems.

A ground storage unit is required to safely store hydrogen under pressure and, with territorial differences in standards, Shell needed a specialist partner to provide a precise, highly reliable and versatile technical solution.

Through a collaborative partnership, CSC has designed a solution that meets the needs of both the European and US required standards, claiming to bring the first standardised solution of its kind to market.

News of the agreement comes after a historic few days for hydrogen in Europe, with the European Commission yesterday unveiling its keenly anticipated hydrogen strategy aimed at decarbonising hydrogen production and expanding its use in sectors where it can replace fossil fuels.

Jake Martin, CSC Commercial Manager, enthused, “There is an unprecedented demand for new, clean energy solutions and hydrogen is leading the way. Storing hydrogen under high pressure requires a highly technical solution and we are specialists in this field.”

“We are absolutely delighted to have been awarded this Framework Agreement, which is an acknowledgement of our core strengths in innovation, design and manufacturing capabilities. Working closely with Shell, we have developed a highly effective solution for their hydrogen storage requirement that meets the stringent demands of international safety standards.”

CSC is part of the Pressure Technologies Group and works closely with the global hydrogen energy sector to develop standardised and bespoke storage for hydrogen refuelling stations.

Chris Walters, Pressure Technologies’ CEO, added, “Supporting growth in the global hydrogen energy supply chain is a strategic focus for Chesterfield Special Cylinders and Pressure Technologies plc. We are committed to a pioneering and long-term partnership with Shell to deliver and support safe, reliable and cost-effective hydrogen refuelling stations.”

Shell recently affirmed its belief and commitment to hydrogen in an exclusive interview coming to H2 View very soon.

The company has been active in the alternative energies space since the early 2000s and the formation of what has become an evolving New Energies business, including investments in solar power, wind power, biofuels, electric vehicle charging, and hydrogen.

Shell’s New Energies business was born in this guise in 2016, since when it has been investing, acquiring and supporting cleaner energy related projects all around the world. When it comes to hydrogen as a clean fuel, Shell has certainly nailed its familiar red and yellow colours to the mast in the last three years in particular.

It was a founding member of the Hydrogen Council in 2017, and in the same year published a study on the future of hydrogen in the transport sector, jointly produced with the Wuppertal Institute for Climate, Environment and Energy.

Its work began in earnest in 2017 too, with Shell becoming the first branded fuel retailer to sell hydrogen at one of its retail sites in the UK, for example. Hydrogen refuelling stations in Cobham and Beaconsfield, in partnership with ITM Power, use hydrogen produced onsite using electricity from renewable sources. This bold path forward has continued apace in the subsequent years, with flagship projects around the world.

Look out for the full interview with Oliver Bishop, General Manager of Shell Hydrogen, including his thoughts on the collective step forward required to move the hydrogen economy onwards, available to subscribers on the H2 View website soon as well as in the upcoming August edition of H2 View magazine.