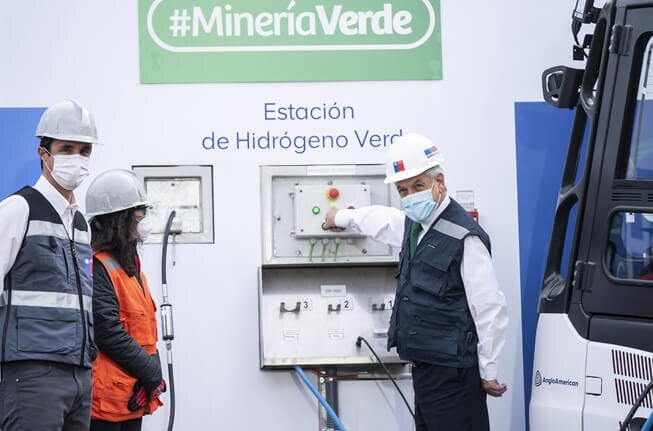 Chile’s mining industry took the next step forward in sustainability this week with the inauguration of the first green hydrogen station that will refuel trucks and forklifts.

Opened by the country’s President Sebastián Piñera, the station is located at Anglo American’s Las Tórtolas flotation plant in the Santiago Metropolitan Region.

At the inauguration, Piñera reaffirmed Chile’s plans to develop a hydrogen industry that exports more than $30bn a year – a level that would be close to the country’s current copper exports.

“Chile has a gigantic potential to become a leading country in the world in the production of Green Hydrogen,” the President said.

The station marks an important milestone in Anglo American’s rollout of hydrogen in Chile.

“Today in Chile, renewable electricity from solar and wind power represents nearly 20% of the country’s energy supply, and the volume of renewables is expected to increase every year,” Julian Soles, Head of Technology Development, Mining & Sustainability at Anglo American, told H2 View.

“Given that between 50% and 80% of the hydrogen cost is the provision of the renewable energy, which Chile already has, the country could become one of the world’s lowest cost producers of green hydrogen.

“If Chile is able to produce green hydrogen at scale, and at a competitive cost, it will have a major role to play in helping the world achieve its decarbonisation targets.

“Overall, Chile’s potential is massive, but it requires developing local markets for its hydrogen, which can then serve as a platform for its scaled-up production and potential export ambitions.

“The mining industry seems like a great opportunity to develop this local market given it is energy intensive and has a lot of diesel to be displaced in its mine haulage operations.”

“We can play a main role as market shaper with an enabler project of Hydrogen Truck, leading coalitions to mobilising the few players of mining and big power suppliers, promoting an entire new value chain of hydrogen production and the consequent virtuous circle of followers, boosting a new Chilean Economy based on a green hydrogen ecosystem.”

In Chile today, Anglo American is building a demonstration pilot of the green hydrogen production chain (solar energy, electrolysis, storage and dispensing) in Los Bronces to be able to move small equipment with fuel cells.

Read the rest of the interview with Soles here.