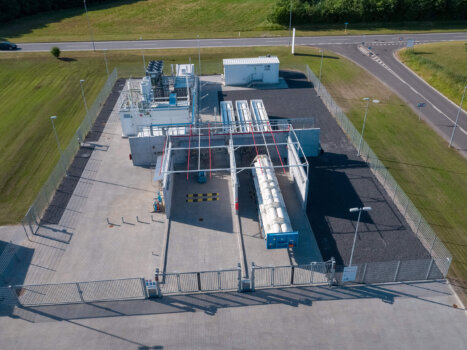 Cummins: Paving the way to a hydrogen economy

Now more than ever, people are looking for ways to leverage renewable energy for a flexible, low-carbon power supply. Hydrogen offers a solution. Using renewable sources such as sun, wind, or hydro energy through electrolysis to produce hydrogen emits no greenhouse gasses. This is commonly referred to as green hydrogen. Energy from renewables can be converted into hydrogen using an electrolyser and utilised in several ways – from hydrogen fuel cell trucks, buses and trains, to ships powered by liquid ammonia made from hydrogen, to a substitute for natural gas for heating homes.

For several years, Cummins has been focusing on solutions that use materials and technologies that have less impact on the planet to deliver value and prosperity for our customers and communities. In 2019, Cummins published PLANET 2050, an ambitious plan which includes science-based targets aligned with the Paris climate accord, and a target to be carbon neutral by 2050.

Through the 2019 acquisition of Hydrogenics, Cummins has developed and installed more than 600 hydrogen generation systems globally. As product demand grows so does Cummins’ footprint. At the end of 2020, Cummins broke ground at a new hydrogen fuel cell production facility in Germany, and in May 2021 announced plans for one of the world’s largest electrolsyer plants for the production of green hydrogen to be located in Castilla-La Mancha, Spain. Cummins also continues to announce the formation of new partnerships and relationships. The investment in Spain comes on the heels of Cummins and Iberdrola’s decision to partner together on large-scale hydrogen production projects in Spain and Portugal, including a 230MW green hydrogen project in Palos de la Frontera (Huelva, Andaluisia, Spain) for the leading fertiliser producer Fertiberia. In May 2021, Cummins and KBR signed a Memorandum of Understanding to collaborate on offering a complete and integrated solution to produce ammonia from renewable sources (green ammonia).