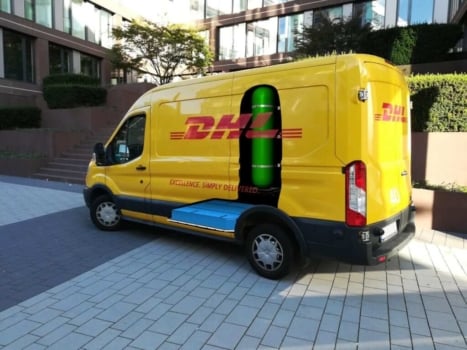 DHL: 5 reasons why hydrogen is the fuel of the future

From rendering freight transportation carbon-free to the convenient use of portable hydrogen ‘capsules’, global shipping company DHL has listed five reasons why hydrogen is a secure, clean and affordable alternative.

1. Zero emissions on the roads

Heavily dependent on fossil fuels for energy, the transportation sector contributes to a staggering 20% of carbon dioxide emissions globally.

Hydrogen-powered vehicles could be the answer to this problem, as fuel cell vehicles, which use hydrogen gas to power an electric motor, emit only heat and water as by-products.

DHL and electric vehicle start-up StreetScooter teamed up to launch the H2 Panel Van, what they claim is the world’s first 4.25-tonne electric vehicle with an added fuel cell that allows it to travel up to 500 kilometres.

As part of its mission to “green” the logistics industry, DHL plans to have 100 of such fuel cell delivery vehicles on the roads between 2020 and 2021.

With a relatively short refuelling time, vehicles with hydrogen fuel cells can also travel for longer on lesser energy.

In China, hydrogen-powered buses can drive beyond 500 kilometres on a full tank of hydrogen – a considerable jump from the 200 kilometres that electric buses typically achieve.

Hydrogen-powered cars in Europe are traveling even farther, up to 800 kilometres or more, on a single tank.

Another example is Toyota’s leading hydrogen-powered car, the Toyota Mirai, which can complete a 3,500 kilometre journey from Northern to Southern Europe and back on just 40 kilograms of hydrogen.

While the costs of producing hydrogen have been cited as a barrier to widespread adoption, companies like Electriq Global are coming up with innovative ways to tackle the challenge.

The Israeli-Australian firm’s hydrogen-based technology allows drivers to travel up to twice the usual distance while paying less than half the price of gasoline.

The best part? The technology is entirely emission-free.

Owing to the large amounts of fossil fuels used, the steel-making and chemicals production industries have long been regarded as emissions-heavy sectors.

The petrochemical and chemicals sector, which produced up to 1.25 gross tonnage of carbon emissions in 2017, is turning to electrolytic hydrogen as a substitute for fossil fuels.

Within the steelmaking industry, the development of breakthrough technologies has led to a large number of promising projects, including a steelmaking factory in Hamburg, which uses an innovative hydrogen-based process to produce steel with low carbon emissions.

As more industries embrace hydrogen energy, the cost of producing it from renewable energy could become more affordable by 2030, said the International Energy Agency in a recent report.

One key benefit of hydrogen is the ease at which it can be stored, shipped, and used. This means that countries with little space for wind and solar equipment will still be able to benefit from carbon-free energy.

Energy companies are constantly finding effective ways to store and harness the potential of hydrogen. In Oxfordshire, United Kingdom, technological giant Siemens has launched the world’s first energy storage demonstrator, which can store and transport carbon fuel safely and effectively.

Hydrogen fuel is so versatile that in 2016, a Japanese research team designed and created hydrogen “capsules” that allow consumers to store hydrogen batteries in their pockets and use them for day-to-day activities.

5. Successful use in space travel

Contrary to popular belief, the use of hydrogen energy is not new. Hydrogen has been used by NASA as a rocket propellant and fuel cell unit to operate auxiliary power units in space since the early 1960s.

But the most memorable use of hydrogen has to be the Apollo moon landing missions in 1967 when NASA used 363 feet tall valves fuelled by liquid hydrogen, liquid oxygen, and kerosene to power its rockets.