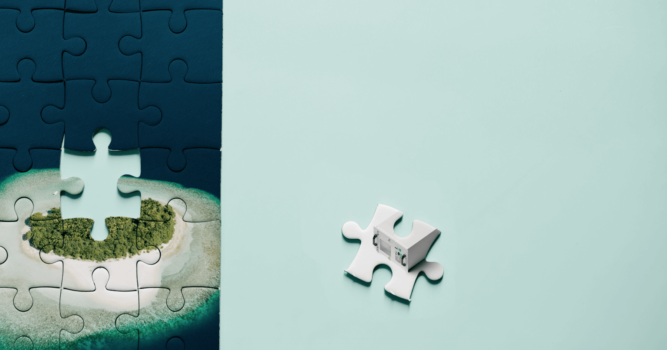 The world looked on in disarray as oil prices went negative for the first time in history. This wasn’t the only covid-induced consequence, an economic global recession followed. Now, thought leaders are witnessing a reversal in globalisation. With so much emphasis on the principle of efficiency and the global production of goods, should maintaining resilience for local economies and energy systems not prevail?

The pandemic continues to highlight substantial changes occurring across society, especially in the energy sector. Digitalization, cognification and tech-fuelled exponential growth of renewables are innovations all based on distributed networks. They allow us to manage previously unimaginable complexities while making nodes more self-aware and capable. Distributed networks, like microgrids, can prove more resilient, adaptive and even self-organising. This perspective is changing. Decision makers are investigating local microgrids as a way to recuperate from the financial crisis by securing the economy and maintaining resilience for energy systems. With the fossil fuel market heavily disrupted post-pandemic, the need for resilience is coming to light. Low oil prices aside, the emergence of cheap renewables optimises the cost of generation in a microgrid and eliminates the reliance on fossil fuels. The benefits of a microgrid therefore extend beyond energy independence and zero carbon emissions; they are also economic.

The IEA has projected that 30% of future electrification efforts will be supplied by microgrids. This includes existing diesel microgrids that could be integrated with renewables as well as future built microgrids that will likely skip fossil fuels altogether. While microgrids have long been associated with rural electrification in the global south, the proliferation of renewables triggers the reconceptualising of old frameworks in the energy world. PG&E, the largest utility in California, filed for bankruptcy since causing catastrophic wildfires from their transmission lines in 2017 and 2018. They are now conducting “wildfire safety works in local communities”. This means nothing less than the utility is opting to de-energise large transmission lines and instead supply power to local communities from renewables via microgrids. The environmental advantages of this are evident, but the economics of doing so remains a question.

Microgrids are electric power grids that can function independently, with off-grid versions adopted in remote areas. The infrastructure generally consists of a fusion of generation, storage and energy load management which makes them such a reliable and efficient power supply. Microgrids are usually implemented due to the remoteness of locations, lack of access to the national grid and economic reasons. In the last decade, renewable energy sources have been transforming the microgrid landscape, consequently reducing or even eliminating the need for costly fossil fuels. This has been made possible through the use of hydrogen.

Introducing hydrogen to microgrids solves the problem of seasonal or long-term storage that batteries cannot provide. It is the crucial jigsaw piece for 100% green microgrids. A typical microgrid is often oversized with an average of 30% excess solar being lost as it cannot be stored for a time when needed. When excess renewable energy is available in a hydrogen microgrid, it maximises the use of renewable sources producing electricity through water electrolysis. The excess from renewables is transformed to hydrogen via electrolysis, with any excess hydrogen stored and used during periods of low supply and high demand. While batteries are great at load shifting, they cannot provide for efficient long-term storage. Here hydrogen is the perfect partner as it can be stored with a very high energy density and low carbon footprint – a major advantage when land availability is restricted. With the help of a fuel cell, the stored hydrogen produces electricity when needed. The hydrogen system is equivalent to a backup generator that complements the battery setup and offers total energy independence. Seasonal storage of green hydrogen also accommodates yearly cycles in electricity demand and variable solar or wind. Hydrogen storage is therefore an instrumental part of a smart power system, stabilising the microgrid and ensuring full energy independence from renewables. It replaces the need for a diesel generator altogether.

As hydrogen prices drop, the potential of green hydrogen storage in replacing diesel and enabling the transition to a completely decarbonised power system is being realised. Cirque de Mafate is a popular hiking destination located in Réunion, a remote island in the Indian Ocean. Accessible only by foot, it is home to 700 inhabitants. The energy system is completely free of fossil fuels and comprises photovoltaic panels, electric batteries, an electrolyser for hydrogen production, hydrogen storage tanks, and a fuel cell. The electrolyser and fuel cell replace the diesel generator by working together to generate hydrogen and produce power. Power from solar is used first to satisfy demand. When that has reached peak, solar panels charge lithium-ion batteries, providing up to 5 days of autonomy for the local buildings. When the batteries are fully charged, excess solar from photovoltaic panels power the AEM electrolyser to produce hydrogen. The hydrogen can be used by the fuel cells to generate electricity or to recharge the lithium batteries. Hydrogen storage provides a further 10 days of autonomy. Mafate is proof of a zero-emission, decentralised system that is resilient to shock, even in the most extreme weather conditions.

Putting the eco in economics

Renewable microgrids with hydrogen storage offer undeniable benefits but the financial side has left many unconvinced. The major cost in a microgrid is the energy storage system (ESS). In a battery ESS, the storage itself – battery modules – is the costly part. For seasonal storage, such costs render the battery ESS prohibitively expensive. If long term storage is provided by a hydrogen system, the actual storage (i.e. holding energy in hydrogen tanks) is cheap, with a trade-off of relatively higher capex due to charging (electrolyser) and discharging (fuel cell) components. However, if sized smartly, the cheap hydrogen storage medium that doesn’t lose energy, is durable and isn’t affected by charging cycles offsets electrolyser and fuel cell costs. This puts a new perspective on renewable microgrid viability.

To highlight the efficiency and economics of using hydrogen as storage, we chose Koh Jik, a small off-grid island in Thailand, as a case study. Since 2004 it has been powered by a solar/diesel/battery microgrid supplying electricity to the 100 households of 300 inhabitants living on the island. It is arguably one of the oldest and economically feasible microgrids in Southeast Asia. At the current price points, hydrogen is more economic and beats diesel in this pilot study. At present, 40kW of photovoltaic panels, in combination with a lead acid battery system, cover 50% of the island’s energy demand. The rest is being supplied by a diesel generator. After 15 years, the system is ready for an upgrade. The original plan was to upgrade to of solar and add new batteries. This would increase the renewable share to a whopping 85%. However, 15% of power would still need to be covered by a diesel generator. Ironically, in this setup Koh Jik would have enough solar available to cover its energy demand, but 30% of solar generation throughout the year needs to be curtailed as the batteries can’t suffice the long-term storage need. The load profile of the island would look like this: 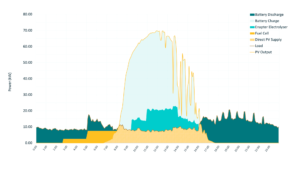 What is most interesting is that the hydrogen scenario is more cost effective than the diesel. We analysed the cost of a kilowatt hour from diesel compared to that from hydrogen. The cost of operating a diesel genset, on top of fuel and logistics makes diesel more expensive from the outset – and this is with post covid-19 diesel prices at 70 US cents per litre. The cost of fuel in the diesel scenario amounts to 31 US cents/kWh and another 31 US cents/kWh for power generation. In total, the cost of electricity from diesel in this setup amounts to 62 US cents/kWh.

In comparison, the hydrogen solution costs uses green electricity that would otherwise be curtailed, storage tanks, a hydrogen generator and accessories. This constitutes to a fuel cost of 45 US cents/kWh. For the power generation, a fuel cell is required which adds 13 US cents/kWh. In total, the cost of electricity from hydrogen amounts to 61 US cents/kWh. 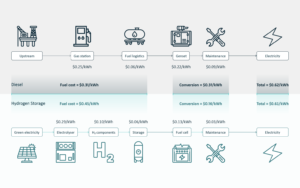 When coming to this conclusion, we have assumed full retail costs for all equipment, post-covid prices and conservative cost reductions on the hydrogen system over the next 10 years  (see list of assumptions). have also used the best possible conditions for the diesel scenario. This includes post-covid diesel prices of 70 US cents and moderate logistics costs for the diesel transport, which are likely to be higher on other islands in Southeast Asia. While the post-covid oil prices are very low, if we assumed average 2019 oil prices, diesel is still much more expensive. Diesel price escalation over the project lifetime is assumed with only 1%.

It’s important to recognise the wide scope for cost reductions across hydrogen. As an electrolyser manufacturer, we will see the cost of electrolysers . The lifetime of fuel cells and electrolysers will increase as technology advances, making the numbers even more appealing. Hydrogen is removing diesel from the scenario. The economics are crystal clear and will only continue to improve for hydrogen. All of which is considered in gaining finance for such projects. The cost of financing can be a factor for impact investors and the development sector. We have assumed interest rates of 5% in our calculation for both hydrogen and diesel. With low interest financing, it would assist the hydrogen use case and its proliferation.

Since the recent global crisis, governments have taken a more pragmatic approach to renewable microgrids as a way to help rebuild the economy and promote ecology; with hydrogen at the forefront of stimulus packages. The World Bank recently highlighted that that mini grid investment in Africa and Asia totals 5 billion US Dollars today and is expected to rise to 220 billion US Dollars; which is the amount needed to connect 500 million people to 210,000 mini grids in these regions by 2030. With the development of efficient energy storage systems and significant cost reductions in solar and wind systems, the technical advances and economic benefits of renewable microgrids is making a strong case. Now, the figures outlined above reveal that it is cheaper to switch to carbon free alternatives. For the past few years, hydrogen has proved itself in transforming microgrids into a reliable, clean power source for everyday use. Now it proves itself in making them more economic than diesel.