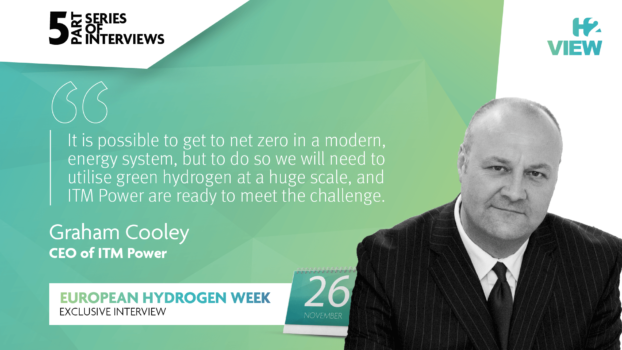 The last time H2 View got the chance to speak to Graham Cooley, CEO of ITM Power, he shared how he felt the company was in the right place at the right time. Thanks to its focus on mobility and power-to-gas, the UK hydrogen energy solutions manufacturer was, at the time, seeing considerable growth.

“I think ITM Power is in such rapid growth partly to do with having the right products at the right time, but it’s also to do with this shift in thinking from major energy companies who now see hydrogen as a key component in decarbonising the whole of energy,” Cooley said in July 2019.

18 months on from that last conversation, it’s clear ITM Power is still in the right place at the right time. In 2020, the company unveiled a new joint venture with Linde, ITM Linde Electrolysis (January) to focus on providing global green gas solutions at industrial scale – 10MW and up – using ITM Power’s modular PEM electrolysis technology; established subsidiary ITM Motive to build, own and operate a network of publicly accessible hydrogen stations (May); revealed a record backlog which today stands at £120m; and announced a new partnership with Italian energy infrastructure company Snam, who bought a minority stake in ITM Power (October).