From high-performance aerospace and automotive alloys to hard-to-machine medical grade titanium, Precision Micro works with its customers to develop complex, burr and stress-free parts to the most exacting specifications, with pinpoint precision.

Now, you’re probably wondering what a chemical etching company is doing on H2 View, a platform dedicated to news, views and analysis throughout the hydrogen energy supply chain.

Well, Precision Micro is currently working with a number of alternative energy providers in developing photo-etched bi-polar plates for their fuel cell stacks. 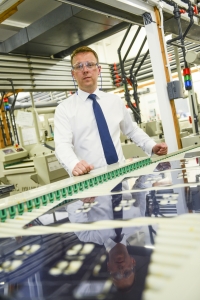 H2 View spoke exclusively with Mick Taylor (pictured left), Precision Micro’s Commercial Director, to find out more about the company’s role in the hydrogen space and what exactly bi-polar plates are…

Thanks for giving us your time Mick. Could you tell us a bit more about Precision Micro and what chemical etching is?

What activities related to hydrogen is Precision Micro currently pursuing?

Currently, we are working with a number of leading alternative energy providers in developing photo-etched bipolar plates for their fuel cell stacks.

What are bi-polar plates?

Bi-polar plates are typically machined with complex grooves or channels which enable liquid and gases to flow and can be variously manufactured using CNC-machining, hydroforming and stamping, but there are question marks over the scalability and capability of these processes.

Unlike hydroforming and stamping, etching requires no hard tooling, the use of digital tooling being inexpensive to produce and adapt, and therefore allowing designs to be optimised at minimal cost.

The process also offers almost unlimited channel complexity on both sides of the plate – etching these features simultaneously – and can profile plates which are burr-free, stress-free and flat, meaning stack bonding accuracy will not be compromised.

Can you tell us about any recent hydrogen-related projects?

Precision Micro has been involved in a number of fuel cell projects over the years, including the production of bi-polar plates used to power zero emission black cabs during the London 2012 Olympic Games.

Today we are working on a number of groundbreaking projects in which etching is helping to enable hydrogen compression and heat exchange for refuelling applications.

How does etching enable hydrogen compression and heat exchange for refuelling applications?

Much like the bi-polar plates produced for the black cabs but manufactured on a much larger scale.

Etching can produce plates up to 1500mm x 600mm in size and in thicknesses up to 2mm thick.

The plates themselves support hydrogen fuelling Infrastructure, which will ultimately enable the launch of a consumer hydrogen-powered fuel cell electric vehicles market.

Can you tell us any more about the bi-polar plates produced for the black cabs during the London 2012 Olympic Games?

Precision Micro were approached to support the development of the proprietary metallic bi-polar plates used to power the black cabs.

Each iteration of the 0.5mm thick stainless steel bi-polar plates were etched in a single machining operation and supplied in a matter of days, helping reduce the development timeline.

The speed of supply was aided using digital tooling which can be produced in under an hour and in many instances charged at less than £100, significantly cheaper than the tens of thousands of pounds it would have cost to produce the press tool.