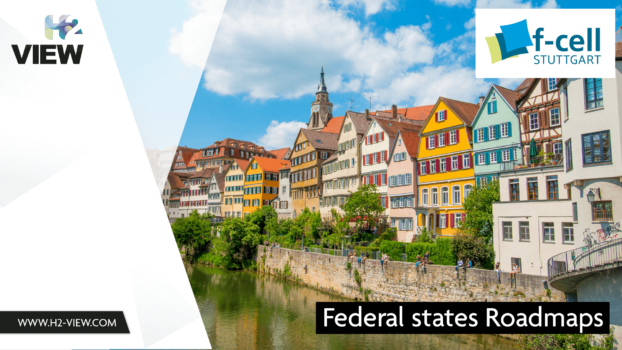 Focusing on the North Rhine-Westphalia (NRW), Dr. Thomas Kattenstein from EnergyAgency was the first to take the stage. “Everyone is talking about hydrogen,” he said. “We are hearing about it on both a European and national level.”

“The motivation is clear. We want to be able to decarbonise many sectors and we want to put green hydrogen into those sectors, but it is also clear that the transport and automotive sectors are the most important drivers.”

Whilst on stage, Kattenstein spent some time discussing some of the companies and projects that are currently active in the region. Referring to the likes of Shell, Air Liquide, BP and Siemens Energy, Kattenstein showed that the interest in hydrogen for NRW is already well established.

Demonstrating what companies, much like the above, are doing in NRW, Kattenstein focused on two projects: REFHYNE and GET H2 Nukleus. He then also went on to discuss some mobility projects that the region is working on.

Referring to the REFHYNE project, which began in January 2018, Kattenstein explained that it will feature what is thought to be the world’s largest hydrogen electrolyser, to be located at the Shell Rhineland Refinery.

To be operated by Shell, and manufactured by ITM Power, the electrolyser hopes to produce approximately 1,300 tonnes of hydrogen per year, with production scheduled to start at the end of this year.

Speaking about GET H2 Nukleus, Kattenstein explained that it involves the construction of the first publicly accessible hydrogen infrastructure.

The approximately 130-kilometre-long network from Lingen to Gelsenkirchen will link the generation of green hydrogen with industrial consumers in Lower Saxony and North Rhine-Westphalia.

Next to take the stage was Stefan Bergander from HYPOS. Introducing the audience to HYPOS, he said, “HYPOS is a connecting the power, natural gas and chemical grid in east Germany via green hydrogen.”

“HYPOS is a long-term network of small, medium and major sized companies, as well as research institutions, that are working on the entire hydrogen supply chain of production, transportation, storage and utilisation.”

Bergander used his time on stage to talk about some of the ongoing projects at HYPOS and what the network is doing in Germany. “We currently have 34 projects, covering the whole value chain of hydrogen,” he told the audience.

Talking about the variations of the projects, Bergander explained all the procedures HYPOS goes through to establish each of its projects, including safety research and costing. “We are currently the largest R&D consortium concerning hydrogen in Germany,” he said.

“Our network is about R&D but currently, we are starting to be more focused on utilisation and actually implementing technologies that will produce massive amounts of green hydrogen.”

The last speaker for the Federal State Roadmaps session was Philipp Runge, Head of Strategy Development for Centre Hydrogen. Bavaria, a state-financed and coordination centre for hydrogen issues in Bavaria.

“We have a broad membership and of course, we want to extend our alliance,” he told attendees. As well as extending the alliance, Runge also share some other future plans for the alliance: