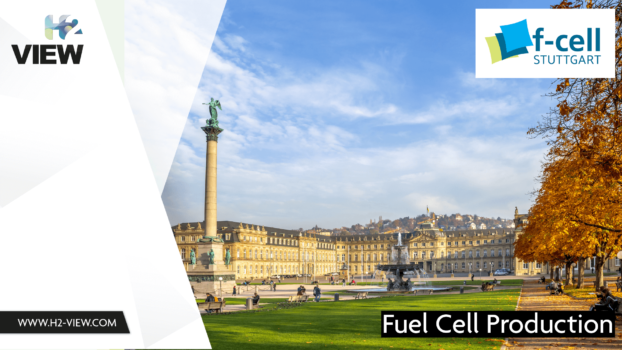 In one of three final sessions at the f-cell Stuttgart event, fuel cell production was heavily discussed by industry experts from Ballard Power Systems, ElringKlinger and ZSW.

The conversation based around enhancing fuel cell production, suitably followed on from Dr. David Hart’s question asked earlier this morning, “are we actually moving fast enough?”

Dr. Moshine Zahid from ElringKlinger was first to take to the stage, who spoke about fuel cell technology for automotive applications. Introducing the company, he said, “ElringKlinger is an automotive supplier. We have a global footprint with 45 locations worldwide.”

“We started the development of pure fuel cells inhouse back in 2010. In 2013, we produced the first stack to be delivered to customers and since then, we have been awarded and we have started building new platforms.”

Speaking to the audience about how the company has developed since it’s early involvement in fuel cell development, Zahid showcased two products, one of which was the NM12.

Zahid then also spoke briefly about a new product the ElringKlinger will soon release. “We are trying to offer to each application, the power output needed,” he said teasing the product.

The next speaker of the session was Dr. Lee Sweetland, Director of Advanced Manufacturing at Ballard Power Systems, who earlier this week shared Ballard’s goal to expand its MEA production capacity by six times.

During his virtual time presenting, Sweetland shared some of Ballard ambitious goals and how it hopes to achieve such goals.

“Ballard has set a hugely challenging cost reduction target. We plan to reduce our stack costs, compared to a 2019 baseline, by over 70%,” he said.

Speaking about how Ballard hopes to achieve its goal, Sweetland shared Ballard’s 3X3 Plan, which has three key areas:

Sweetland shared a number of graphs and illustrations with the audience which highlighted how the 3×3 Plan will help Ballard achieve its reduction goals.

Speaking about future innovations, Sweetland commented, “Ballard is currently developing a next generation stack and that stack is aiming to push the current density significantly. We’re expecting to be able to achieve an over 28% increase in peak power of the stack.”

Last on the stage was Dr. Ludwig Jörissen of ZSW, who was also chair of the session. “There is a lot of competitive fuel cell technology in Europe,” he told attendees.

Whilst on the stage Jörissen told attendees about the HyFab project. “HyFab will establish an industrial network to deal with fuel cell production technology. It will also provide an open source and modular stack to test assembly and optimise new manufacturing processes,” he said.