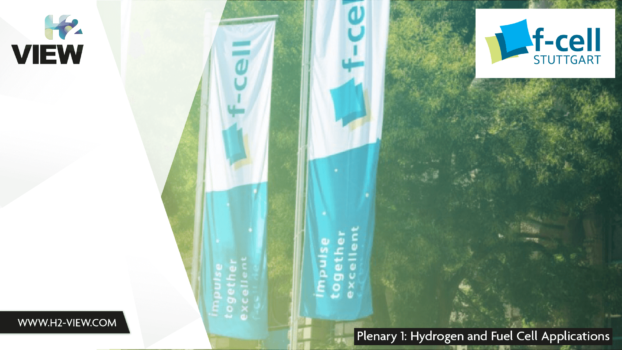 Why is Bosch introducing fuel cells for different use cases? And how do the company’s fuel cell innovations effectively serve a range of markets? Those were the points of discussion presented by Jürgen Gerhardt, Senior Vice-President of Fuel Cell Mobility Solutions at Robert Bosch as he spoke at f-cell Stuttgart this morning.

The Germany-based company currently manufacturers two different types of fuel cells, both of which were introduced today by Gerhardt. “We have our solid oxide fuel cell for stationary use cases and our proton-exchange membrane fuel cells for mobile applications,” he told the audience.

“You might wonder why we have been two different approaches of fuel cells to serve different needs and I will explain why we are doing so.”

“The system is also rather nicely scalable, and this scalability has almost unlimited applications. We have been teaming up with Ceres Power since 2018 and are preparing those systems and are running those systems already.”

Since signing a strategic agreement in August 2018, Ceres and Bosch have been successfully collaborating in the development of fuel cell stacks for stationary power applications.

“This is why we are striving for fuel cell applications, not only for commercial vehicles but also as an attractive solution for passenger vehicles,” he told the audience.

Giving an update on mobile and stationary applications at Ballard, he said that Ballard is one of the early starters in heavy-duty mobility. The company is today powering thousands of heavy-duty vehicles globally.

“Whether that’s buses, trucks, trains, ships or vehicles like material handling, Ballard has been one of the early starters and that’s based on hydrogen’s value proposition: longer range, more payload, more kilometres on the highway and fast hydrogen refuelling time,” Ulec said.

“Hydrogen has the potential really one-to-one to replace the diesel engine that motors vehicles.”

By the numbers, Ballard is powering more than 1,000 transit buses, 2,200+ trucks, four train projects on track and five ships in development. It has also delivered 670MW of fuel cell products and produced more than 5.5 million MEAs.

Ulec moved on to highlight the company’s technology, including its three platforms of liquid cooled stacks to address all mobility applications:

Professor Dr. Christian Mohrdieck, who has been active at Daimler in the field of fuel cells since 1999 was last to take the stage this morning.

Mohrdieck shared with the audience some of the standout points of Daimler’s fuel cell engine model which is featured in its B-Class F-Cell hydrogen-powered vehicle, eight of which are participating in the hydrogen challenge currently ongoing at the f-cell conference.

“It is important to know that the arrangement, in terms of soft and hard parts, is very similar to internal combustion engine architecture, which ensures that we also have the same crash behaviour,” Mohrdieck told the audience as he detailed some features of the Daimler innovation.

Talking about the concept Sprinter, a motorhome-like concept, Mohrdieck explained, “We used the concept in the Sprinter, a vehicle which has special requirements. With this vehicle, user will go to a remote location and use the vehicles power for cooking, taking a shower, or heating the vehicle.”

“This concept would enable you to go off site for a week and use all of the appliances in the vehicle and then after the one week, have enough power to drive 300km. This is due to the very high energy density of hydrogen.”