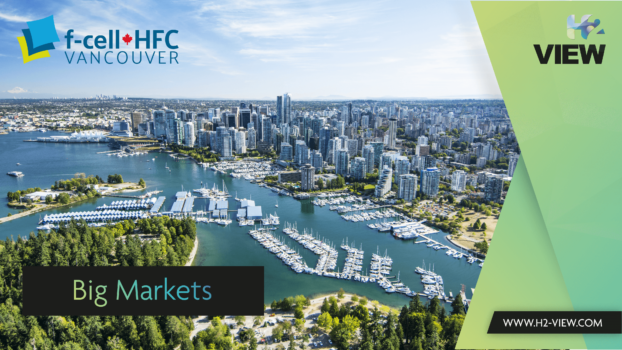 f-cell+HFC: The motivation for hydrogen is high

Mark Kirby, President and Chair of the Canadian Hydrogen and Fuel Cell Association (CHFCA) once again welcomed f-cell+HFC attendees as they prepared for a second day of thought-provoking presentations.

“Hello again and welcome to f-cell+HFC 2020,” he said. Kirby took the opportunity as Chair of the session to discuss the CHFCA, highlighting how the association supports it members, and drives deployment of hydrogen and fuel cell technologies.

Next to take to the stage was Minister Bruce Ralston, British Columbia’s Minister of Energy, Mines and Petroleum Resources. During his address to the event, Ralston spoke about hydrogen’s potential in British Columbia, explaining how the fuel can cut greenhouse gas emissions and help economic recovery in a post-pandemic world.

“We are now in a great position to make hydrogen an important part of our clean energy future. The fact is, hydrogen is a vertical energy source that will play a huge role in reducing greenhouse gases across the BC economy, to meet our clean BC objective,” he said.

“Hydrogen is both safe and clean when produced either from hydroelectricity or natural gas with carbon capture, and we will support only low carbon hydrogen pathways. By 2050, hydrogen alone has the potential to reduce emissions by 15.6-megatonnes or 31% of BC’s greenhouse gas reduction goals.”

“The pandemic could be a great opportunity for us to turn the economic challenges imposed by covid-19 into an opportunity of resilience and long-term energy sustainability from British Columbians.”

“We now host the largest cluster of hydrogen and fuel cell companies in Canada. British Columbia is considered to be a world leader in the commercialisation of this technology, exporting clean solutions for decarbonisation to Asia, Europe and to the US.”

“Today, the motivation for hydrogen is driven by the need for emissions reductions across our energy systems.”

Concluding his presentation, Ralston said, “Hydrogen is the only practical solution for addressing the hard to decarbonise fossil fuel end users like heavy duty transportation and industrial heat. Government support for hydrogen needs to be clear, start early and include infrastructure investment, which is what we are doing.”

Andy Marsh was the next speaker on the virtual stage. Having joined Plug Power twelve years ago, Marsh holds a great knowledge of the hydrogen and fuel cell sector and has helped to grow the Nasdaq listed company, which now stands as the largest manufacturer of MEAs in North America.

“I think we are all finding the hydrogen economy very exciting at this time. McKinsey is forecasting that the hydrogen market could be a $2.5 trillion-dollar opportunity by 2050,” he told attendees, emphasising the great potential for hydrogen and fuel cell technologies.

“When you take a look at governments and policies that countries are focusing on and developing to reach the climate goals, there are certain applications where the only solution is hydrogen and fuel cells.”

“There’s a multitude of applications where fuel cells and hydrogen are so important, and that is why we are seeing all of the ongoing work happening around the world. Hydrogen is becoming mainstream.”

Marsh then went on to talk about some of the moves that companies are making to shift towards a renewable energy future. BP, Shell, Nikola, Air Liquide, NextEra and Bloom Energy were just a few which he discussed, highlighting the hydrogen efforts that the companies are now pursuing.

An overview of Plug Powers operations which are helping to company to grow and drive down costs of fuel cell products were also discussed. “Today we have over 35,000 fuel cells operating in the field. Many of those operating 24 hours a day in varying temperatures. On top of that, we are operating some of the most difficult and challenging operations in the world.”

“It is a big market opportunity for all of the companies in the states, and to the critics wondering if the hydrogen market it real, you just need to look at all the investments and the projects happening around the world.”

Dr. Sunita Satyapal, Director for the US Department of Energy’s Hydrogen and Fuel Cell Technologies Office followed Marsh, providing a deep insight into the US’ hydrogen and fuel cell market growth and how the country is moving away from fossil fuels.

“Today, we [the US] produces 10 million metric tonnes of hydrogen annually in the US, the world’s largest hydrogen storage cavern, more than 1,600 miles of hydrogen pipeline and a growing network of refuelling stations,” she told attendees.

During her time on the virtual stage, Dr. Satyapal discussed some of the exciting projects and programmes that the Department of Energy is working on to push forward the hydrogen and fuel cell market, telling attendees how such technologies can transform different markets.

Concluding her presentation, Dr. Satyapal then went on to discuss just how important collaboration is. “It’s really about all the people, and if we are going to get this happen, we really need all of the players in the industry, the government and the investors on board.”

Trong Stromgren, from Ocean Hyway Cluster in Norway rounded up the first session on the main stage and share insights on the Norwegian maritime hydrogen development. He informed attendees about some of the hydrogen ferry models that are set to be operational in Norway.

As well as discussing hydrogen-powered vessels, Stromgren also spent some time discussing hydrogen opportunities in offshore wind and ports in and around Norway. He also told attendees about the upcoming maritime hydrogen energy conference in Norway.

f-cell+HFC 2020 going ahead digitally next week