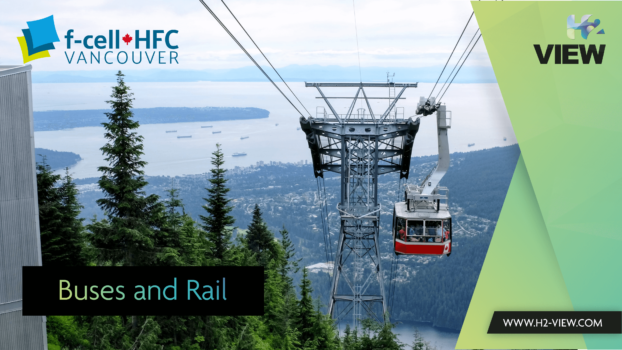 City bus and commuter rail fuel cell applications are ramping up in option because in short, they are so compelling. They provide a zero-emission solution alternative to conventional fleets, while providing the same passenger experience without critical air contaminants and without greenhouse gases.

The operator can deliver the same performance, range, top speed and fuelling time they enjoy with their current fleet. And, as we’ve seen in several reports recently, we have a line of sight to a lower total cost of ownership by the end of the decade.

That’s what we’ve just heard in one of the first sessions after lunch at f-cell+HFC 2020 in the Buses and Rail panel, as H2 View continues its live coverage of the digital event.

First to the virtual stage was Dr. Naveed Akhtar, CEO of Hy-Hybrid Energy. The Scottish clean energy company is involved in a first-of-its-kind fuel cell bus project in Hungary: GOLDiON.

“The GOLDiON project after its completion will showcase the first fuel cell bus ever developed in Hungary. The fuel cell system is provided by Horizon Fuel Cell Technologies, which is our other partner in the project.”

“In order to maintain Hungary’s reputation in the automotive sector, we would like to become first in Hungary in developing and selling buses across Europe at very low prices while keeping good quality standards.”

“To actively participate in the production of hydrogen fuel cell buses in Hungary, GOLDI has built two 350 and 400 sqm halls for fuel cell bus assemblies to install and test the first few prototypes. Other parts of this industrial site ca. 800 sqm is ready to provide hydrogen or hydrogen refuelling stations near the centrum.”

“Later, when the production reaches a certain level, GOLDI plans to consider their second industrial owned site in Szolnok, Hungary. Therefore, we plan to have two industrial sites running, and plan to ramp-up the development of fuel cell buses with around 100 employees.”

A familiar face to H2 View, Lauren Skiver, CEO and General Manager of SunLine Transit Agency was the session’s next speaker. The Californian bus operator has been driving a clean fuels agenda for more than 25 years and moves nearly five million riders annually in the Coachella Valley region, from Desert Hot Springs through to Palm Springs, via its zero emission fleet.

The progressive and passionate alternative fuels supporter currently has 18 hydrogen fuel cell buses and four all-battery-electric within its fleet, with a further ten fuel cell buses on the way, and it wants to be completely zero emission by 2035.

To keep costs down, SunLine has invested in its own hydrogen refuelling infrastructure and makes its own fuel for roughly $8 per kg. Skiver told H2 View in a recent interview that if she had to buy hydrogen fuel on the open market, it would cost roughly $30 per kg, which might explain why the agency is only one of a few in California using fuel cell buses.

“We’re unique at being a hydrogen producer. We actually have the largest production station for transportation in North America, and it’s a Proton/Nel partnership. It’s a 900kg per day production station and it’s been erected with a scalable attribute, so we’re already driving to the next module we want to add to this station,” Skiver told attendees.

“Right now, we’re using 60% renewable solar and I’m gunna talk a little bit about a project we’re working on to make that percentage higher. We’re only using 300kg with our fleet currently with our 18 fuel cell buses, but we have ten more on the way.”

“It’s important to us that we are not just focused on tailpipe emissions but also the way that we are producing our fuel and so we have embarked on a new project which will see us buy 10 acres of property. We’re in the middle of the desert so property is fairly reasonable and fairly available around us. That makes us an easy choice for us.”

“There’s four phases to this project and the first phase we already have the funding for which is the purchase of the property and 2.4 acre solar farm. That’s all the money we have to do at the current time but we’re working on the other phases now.”

Skiver said the next phases are:

From buses to trains, viewers were shown a pre-recorded video from Kenichi Ogawa, of the Railway Technical Research Institute in Japan, in which he detailed development of a hydrogen-powered test train.

“In July 2018, more than two years ago, we received the full homologation for the German network and on 17th September 2018 we started the official passenger service in Northern Germany,” Schrank said.

“This is not the first train using fuel cells but it’s the first train that has made it happen and to be running in regular service with passengers and we have done this over a period of 18 months.”

Most recently, Alstom a groundbreaking ceremony in Bremervörde, Germany for the world’s first hydrogen station for passenger trains. Construction was due to start this month and follows the successful 18-month trial of the world’s first two hydrogen trains in the region.

Linde will build and operate the station on behalf of the Lower Saxony Regional Transport Company (LNVG). Expected to be operational in early 2022, the station will fuel 14 of Alstom’s hydrogen-powered Coradia iLint’s, which will be supplied to LNVG and use the network of regional railway company EVB.