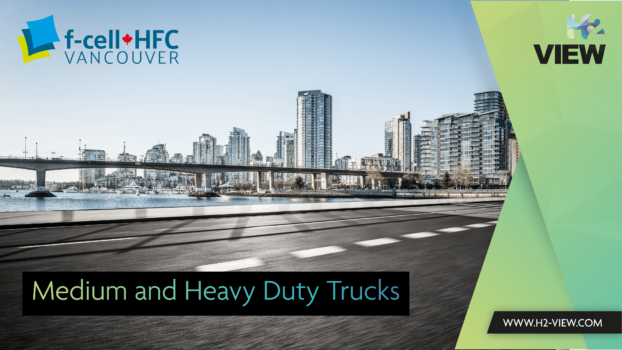 Those were the words spoken by Nicolas Pocard, Director of Marketing at Ballard Power Systems, as he welcomed attendees to the Medium and Heavy-Duty Truck session at the virtual f-cell+HFC event.

“However, regulations are driving the adoption of zero emission trucks. The EU now targets a 30% CO2 reduction target for trucks by 2030, an Advanced Clean Truck Regulation has been adopted in California, low emission zones and corridors are being implemented in Europe, China and California, and China now has New Energy Vehicle Policies that support the deployment of low emission trucks.”

With an undeniable passion for zero emission trucks, Pocard was without a doubt a great fit as Chair of the session, which boasted an impression line-up of speakers. First to take to the virtual stage was Marcel Pouliot, Lead Consultant at IQ Trucking, who spoke about an exciting trucking project in Canada.

“Good afternoon to everybody,” he said. “On behalf of the Alberta Motor Transport Association, we strongly believe that the heavy-duty truck sector in Canada has the potential to become an anchor for the Canadian hydrogen economy.”

“I want to talk to you about the Alberta Zero Emissions Truck Electrification Collaboration (AZETC) which is the first of its kind industry-led project in Canada, that will involve the design, manufacturer and testing of two long-range hydrogen fuel cell trucks, for operation year-round between Calgary and Edmonton.”

“These trucks need to operate at a range between refilling of the hydrogen tanks of at least 700km, and they must generate zero tailpipe emissions. I am looking forward to sharing with you in the coming months, the technical specification of these trucks.”

Whilst informing attendees of the benefits of decarbonising the Canadian trucking industry and the important role that they AZETC project will play in that ambitious target, Pouliot identified three main objectives of the project:

“This is a massive undertaking for everyone, including vehicle manufacturers, anyone involved in hydrogen refuelling infrastructure, regulators, as ultimately every user and every business and organisation are relying on trucks.”

“We have the opportunity to do this right and to make this occur rapidly,” he concluded.

Next to take to the virtual stage was Dr.Chrispher Guzy from Shanghai Re-Fire Technology who provided attendees with an update of what the company is doing to advance China’s hydrogen fuel cell heavy and medium-duty truck market.

Like all of the other members on the panel, he pioneered hydrogen fuel cells as a very feasible alternative to diesel. “Re-fire has only been in existence for five years, but our principles however have been in the fuel cell industry for quite some time,” he said.

Fuelling advancements in the US

From trucking advancements to refuelling advancements, next to take to the stage was Livio Gambone from Nikola Corporation, who spoke highly about the company’s hydrogen storage and fuelling interface solutions for Class 8 fuel cell electric trucks.

As discussed in H2 View’s Nikola series, the company is working hard to deliver hydrogen refuelling stations, with plans in place to have 700 stations operational across North America, with a roll out starting in 2023.

“A fuel cell electric vehicle experience must be on par with a diesel experience,” Gambone said. “Vehicle range must be sufficient enough to achieve long haul missions and vehicle refuelling technology must deliver 100kg of hydrogen fuel in 10-15 minutes.”

“We’ve got an industry consortium which was put together in February 2019 this is working to develop 70MPa HD fuelling hardware including nozzle, receptable, hose and breakaway devices with the goal to: develop fuelling hardware, conduct selective design qualification tests and standardise the fuelling receptable within ISO standard 19268.”

The last speaker in the session was Haengkin Ko, Hyundai Motor Korea who spoke about the company’s fuel cell truck offering, detailing some of the company’s major partnerships and developments.

Although not able to join the event live, Ko shared a pre-recorded presentation which features many video’s which showcased the company’s impressive innovations, such as the XCIENT truck which was recently shipped to Switzerland.

f-cell+HFC: Scaling up to reduce costs and increase volumes