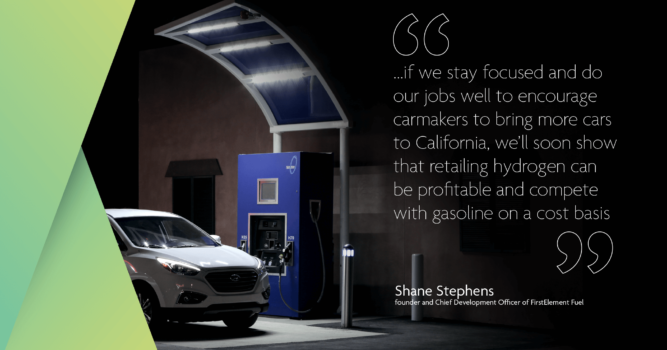 FirstElement Fuel: Driving down the cost of hydrogen

When Dr. Shane Stephens completed his doctoral studies in environmental engineering at UC Irvine’s renowned National Fuel Cell Research Center in California, he knew he wanted to do something in clean energy and be a part of what he calls “a critical mission for civilisation”.

At the time, he was conducting studies about how hydrogen infrastructure could be rolled out in California with fellow scholar Dr. Tim Brown. What they came up with became the building blocks for a network of hydrogen stations today known as the True Zero Network in California.

When Stephens and Brown met Joel Ewanick, the three minds came together and founded FirstElement Fuel, a company formed with the sole purpose of building a hydrogen fuelling network in California.

“The formation of FirstElement Fuel put to rest the question of who will build the hydrogen fuelling network when the fuel cell electric vehicles (FCEVs) launched to market, at a time when nobody was getting off first base,” Stephens, founder and Chief Development Officer of FirstElement Fuel, explained to H2 View in an exclusive interview.