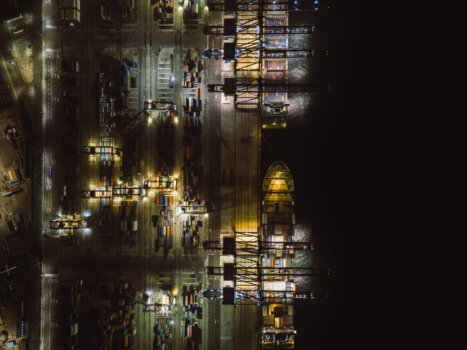 The shipping industry is in the spotlight – facing environmental mandates that require a whole new way of thinking about ship propulsion. Incremental goals such as cleaner diesel are a start, but the reality is much more significant. Monumental shifts are on the horizon, poised to drive new kinds of engines, cleaner fuels such as hydrogen, and modernised ships that reflect a greater level of environmental responsibility. Hydrogen generation on-vessel, on-demand unlocks it all.

Guided by mandates from the International Maritime Organisation (IMO), a UN body, shipbuilders are tasked with reducing carbon emissions by 40% by 2030 and by at least 50% by 2050. (Note that using a 2008 baseline, the 2050 goal reduces carbon intensity overall by 70 percent.)1 This is only one step toward the definitive goal: complete elimination of the industry’s notable carbon impact. How notable? The ocean research group Oceana pegs global shipping as the world’s sixth-largest polluter, in line behind the US, China, Russia, India, and Japan. It’s a level of pollution that demonstrates the need as well as the challenge: energy efficiency measures are not enough to meet IMO mandates, and new fuels are required. Hydrogen fits the bill as a proven clean fuel option but has not been widely deployed on maritime vessels due to a slate of logistical, regulatory, and safety requirements.

Commercialising systems for shipboard hydrogen
Methanol-to-hydrogen conversion offers a critical advance in achieving hydrogen on-demand. For example, major retrofit of ship infrastructure is not required, and existing diesel tanks can instead be used to store liquid, ambient temperature methanol as a feedstock awaiting reformation into hydrogen. Stored compressed hydrogen – and its accompanying heavy footprint and requirement for storage at minus 253° Celsius – becomes unnecessary, eliminating a significant barrier of cost and complexity. Hydrogen is created as needed at a production pace that delivers the same value and purpose as a large tank of pure hydrogen. Today, the methanol-to-hydrogen chemical process uses self-contained cabinet power solutions; these groundbreaking, modular, and scalable systems blend methanol-to-hydrogen generator technology and PEM fuel cells to support fuel cell solutions ranging from 30kW to 100kW, which can be combined to support MW applications, all with high energy efficiency (>80%), and reduced space and weight requirements.

Why methanol?
Methanol has a role to play in commercialising hydrogen on-demand. Its versatility as a synthetic fuel defines it as an ideal method of transport for hydrogen. Methanol is already used as a feedstock on a large scale; liquid at normal temperatures and handled like other fuels, renewable and biodegradable, miscible in water, abundantly available at seaports, and relatively low cost. In a straightforward reforming process, methanol is combined with deionised water, creating a 3:2 ratio, and then heated to the correct temperature and pressure. As the methanol/water mixture heats and turns to steam, applied pressure and heat separate carbon monoxide and hydrogen. This simple process, handled in a self-contained unit that eliminates storage and compression challenges associated with pure hydrogen, solves a raft of problems for shipbuilders. For example, recharging is unnecessary in the continued presence of hydrogen and oxygen, reducing the need for ships to refuel as often. Another unique advantage of the methanol-to-hydrogen system is it is designed for cyclic and variable operation required for shipping operators, as well as the added benefits of no noise and no vibration.