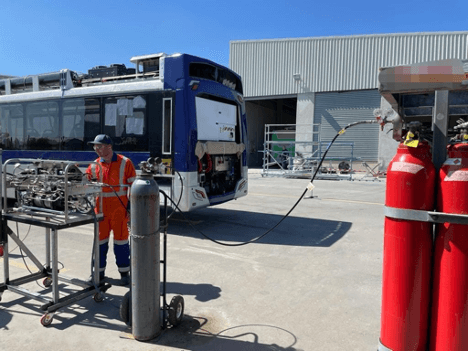 Australia and New Zealand are both keen to harness the potential of hydrogen to provide a clean alternative to traditional transport fuels. The latter published a green paper entitled ‘A vision for hydrogen in New Zealand’ in September 2019, setting out its plan to use renewable energy to produce green hydrogen and move heavy vehicles away from fossil fuels. Two months later, its neighbour announced ‘Australia’s National Hydrogen Strategy’, signalling its intent to use hydrogen for long-distance heavy-duty transport and develop associated refuelling infrastructure.

As a supplier of global refuelling infrastructure for hydrogen mobility, Haskel Hydrogen Systems has been supporting both countries as they transition to a hydrogen economy.

For example, Haskel has signed an agreement to supply transportation and infrastructure specialist ATCO and Fortescue Metals Group with fully packaged refuelling systems for their H2 Refueller project, which is backed by A$1m ($713,400) of investment from the Western Australian government.