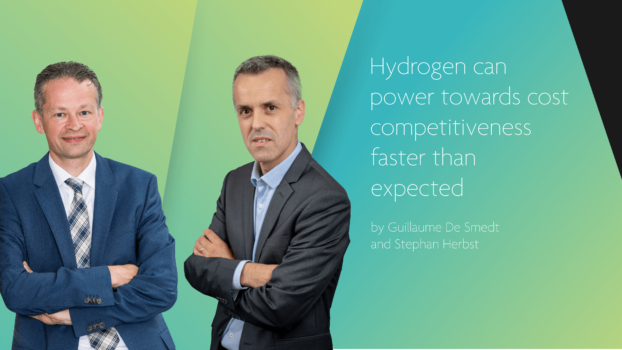 Hydrogen can power towards cost competitiveness faster than expected

Until now, the biggest challenge preventing hydrogen energy from going mainstream has been its price tag. Although it has been effectively used to produce energy for various applications for over a hundred years, the costs associated with hydrogen solutions for everyday use have until now put it out of reach compared to other – cheaper – options.

Today, however, we may be standing on the cusp of a major energy transformation with hydrogen at the core, due to three key factors finally aligning: 1) Real demand for clean energy solutions in response to the climate emergency, where renewables alone can’t solve the problem, 2) Renewed political appetite for investing in change, propelled by the rising expectations for action, and 3) Increasing viability of hydrogen and other ‘alternative’ solutions thanks to the rapidly decreasing costs of technologies used to harness their power.

Over the past year, as members of the Hydrogen Council, we’ve been working to bring new data to the table to demonstrate what our industry has believed for a long time: hydrogen solutions not only have huge environmental benefits, but also substantial economic potential. This data is now available in the new report, titled Path to Hydrogen Competitiveness: A Cost Perspective, which shows that by massively scaling up hydrogen production, distribution, equipment and component manufacturing, the cost of hydrogen1 solutions is projected to decrease by up to 50% by 2030 for a wide range of applications – making hydrogen competitive with other low-carbon alternatives and, in some cases, even conventional options. Simply put, scaling up the hydrogen value chain will unlock cost reductions far sooner than anyone previously expected. This cost trajectory can be attributed mainly to scale-up that impacts the three main cost drivers: