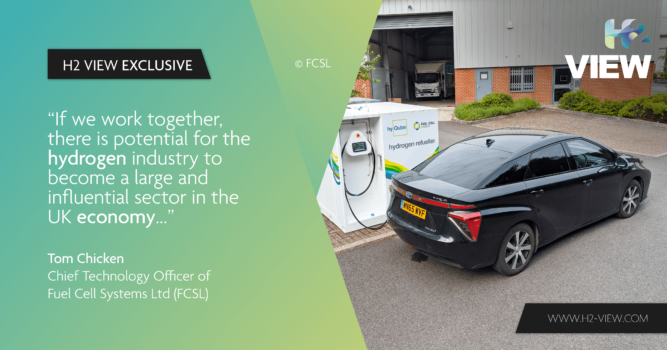 In the absence of a viable hydrogen refuelling network in the UK, Fuel Cell Systems Ltd (FCSL) has responded by developing lower cost, mobile refuelling solutions that are easy to transport and commission, and are enabling manufacturers and operators alike to roll out hydrogen fuel cell products.

To name but a few of the Berkshire-based company’s recent projects, FCSL has delivered solutions to refuel scooters, cars and trains with hydrogen; after implementing a hydrogen refuelling solution for a prototype AA breakdown recovery vehicle, the company has spent the past 12 months supporting a University of Birmingham project to deliver the UK’s first hydrogen-powered train, HydroFlex; and FCSL is currently completing the development of a solution for the European Marine Energy Centre (EMEC) that will fuel the first hydrogen-powered aircraft, HyFlyer.

FCSL has also recently completed development of its latest product, HyQube – an affordable, redeployable system which can be used to refuel a whole range of vehicles. HyQube has received such huge interest across Europe that the company has recently expanded and taken on a new manufacturing facility.

FCSL is now in the process of developing a new range of cost effective, transportable and scalable solutions that it says will help to break down the barriers of a future hydrogen industry in the UK and accelerate uptake of hydrogen as a viable fuel in this country and further afield.

To talk about all this and more, H2 View caught up with Tom Chicken, Chief Technology Officer at FCSL.

Thanks for your time today Tom. For any of our readers who may not have heard of FCSL before, could you give us a brief overview?

Sure, FCSL was formed in 2010 as a spin-off from UPS Systems plc, the power technology provider. Our background is standby power systems.

About 15 years ago we looked into fuel cells for another means of generating power for data centres and we started installing and selling fuel cells into the market. We installed the UK’s first fuel cell standby power system for the support of a live IT network in our own offices in 2006.

Fuel cells at the time were a relatively new technology. I’d say we were one of the few people in the UK working with those systems and we soon became the UK experts on installing fuel cells.

Now, the company also provides installation support for other major names in the UK fuel cell industry as well as maintaining a dedicated team who advise and support other users and consumers in their use of fuel cell technologies. Increasingly, a key area for us now is hydrogen refuelling systems.

You just mentioned a key area for you now is hydrogen refuelling systems, can you tell us more about this area of focus?

We kept coming across the problem of “where do you get your hydrogen from?” So, we decided to do something about it. With our background in fuel cells, we already knew how to use hydrogen, the safety measures you need to put into place and how to write control systems. We put all of that together and we’ve developed a range of low-cost hydrogen refuelling solutions.

This is an area that really makes us niche as lots of other companies are doing larger scale hydrogen refuelling solutions which cost several million pounds. But a lot of people want to spend less than that on their initial trials or their initial step into the hydrogen area. We can provide lower cost solutions and portable mobile solutions that can be scaled up when required.

Yep, that’s a really exciting project for us at the moment. We won the tender at the backend of last year to provide a hydrogen refuelling system for the world’s first hydrogen-powered aircraft.

We’ve designed and built them a hydrogen refuelling truck. We have one ourselves which has been used for the last few years filling up Toyotas and Hyundais, trains and scooters, but this one is a lower pressure, 350 bar system. It can compress the hydrogen from a source – which is going to be an electrolyser – and it can then drive that hydrogen onto the apron at the airport to fill up the plane and then return and replenish its hydrogen supply. We’ve just completed the build on that and it’s waiting to be delivered. 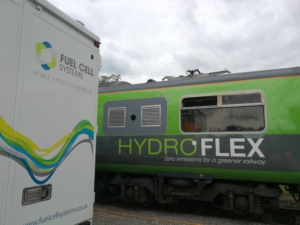 Can you tell us about any other projects?

We’re working on lots of projects at the moment, but not many I can talk about. I can tell you we’re working closely with most of the major fuel cell motor manufacturers and we’re still involved in the HydroFlex train project.

Separate from hydrogen refuelling, I can tell you about a hydrogen fuel cell project we’re involved in. We’re designing the hydrogen systems for a hydrogen-powered off grid house being built near Exeter in the UK at the moment. It was actually showcased on Channel 4 news recently.

The developer has a plot of land and is going completely off grid. Power will be generated from solar panels during the summer months and daytime.  Any excess power will be stored as hydrogen.  During the winter and evenings, when there’s less sunlight, hydrogen will be used through a fuel cell to provide power for the house and for their fuel cell electric car.

The idea is once this house has been completed, over time the cost of similar projects will come down and become a more affordable solution.

FCSL recently developed its HyQube product. What can you tell us about this?

We’ve been continuing to build smaller refuelling solutions, and we’ve just built our first HyQube. This is a small, self-contained hydrogen refuelling system, which takes the hydrogen feed and does a slower fill at a fraction of the price of a static station. That’s had such huge interest across Europe that we’ve taken on a new manufacturing facility to build them.

It’s an exciting time for us and we’re hoping to scale up production of the HyQube system later this year.

Would you agree that hydrogen interest in the UK has increased massively recently?

Yes, over the last six months especially. There are so many people not just interested in hydrogen, but actually doing things with it. An increasing number of vehicle manufacturers are developing fuel cell electric vehicles, but they need to find a reliable way to access hydrogen.  We’ve had enquiries from a number of companies running vehicle test tracks, wanting to offer a hydrogen refuelling capability to assist the manufacturers.

The European Hydrogen Strategy document has just come out, there’s lots going on. We’ve noticed there are hubs being established, with solutions being implemented at a local level to supply hydrogen to small fleets of cars, vans and buses. Things are starting to move quite quickly.

We’re just starting to talk about trends here, have you noticed any trends in the way hydrogen is being used in the UK or in Europe more generally?

In Europe, there are deployments of multiple filling stations in regional areas. There’s significant investment going into quite a few hubs there. Even within the UK, there’s more talk about setting up these types of things. We’re lagging somewhat behind, but the trend is there. It’s moved beyond proof of concept to properly putting equipment down on the ground, and multiple pieces of equipment as well.

For us as well, the trend is people are opting for multiple lower cost solutions rather than a single static station. This adds a degree of redundancy, giving the customer greater confidence in the reliability of the system.

In the UK there’s only about 12 static stations at the moment, so the infrastructure is just not there. I drive a Mirai myself and you always have to plan your route to work out how you’re going to get somewhere. I don’t mind if it takes a little bit longer, if I could just go further afield that would be good. 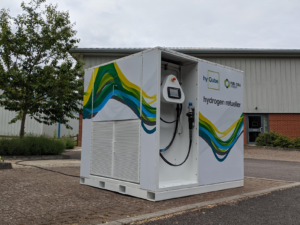 How do you find driving a hydrogen fuel cell car in the UK with such a small amount of stations?

Generally, it’s ok. Before I got one, I worked out what my average journeys were going to be, and I realised most of my trips do go past one of the refuelling points. I normally fill up at either Swindon or on the M25. I just have to constantly figure out how much hydrogen I’ve got left and where the nearest filling station is.

The car is fantastic. It’s really nice to drive around in it.

What do you see as the biggest barrier to a large-scale hydrogen industry taking off in the UK?

Support and investment from the government is a major hurdle at the moment. The government has acknowledged that hydrogen has to play a role to achieve its net zero goal, but the money they have invested so far has been very, very little compared to battery technology. They really need to increase the investment as well as just saying they require the technology.

As I was saying, there’s only around 12 stations at the moment and the government could easily fund further 20 for not very much compared to the amount they’ve invested in other areas. It would really help seed a lot of the UK hydrogen network. If you’ve got the cars filling up, you’ve got the demand and then you’ve got large-scale hydrogen production which enables the buses and other commercial vehicles. Everything just comes together.

What could be done to overcome it?

There’s a lot of smaller industry bodies in the UK and up until recently, they’ve almost acted independently. They are now starting to come together to give a consistent message, and lobby government in a coordinated manner.

Certainly the government needs to do something, but equally the industry needs to come together and tell the government what we actually need. If we work together, there is potential for the hydrogen industry to become a large and influential sector in the UK economy.

Exclusive: BMW ready to get behind hydrogen drivetrains