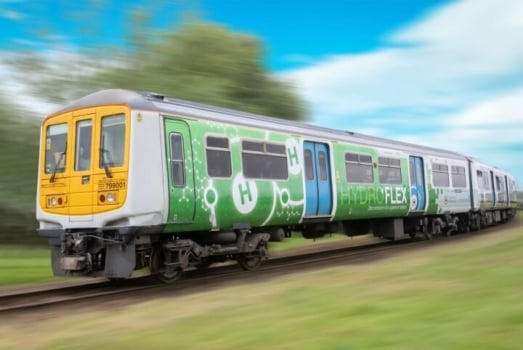 Hydrogen-powered trains to feature at COP26 2021

By George Heynes on May 28, 2021
Translate
News Mobility

Network Rail and Porterbrook will showcase the hydrogen-powered HydroFLEX train and other low-carbon train technology at the UN Climate Change Conference (COP26) later this year.

Revealed today (May 28), it is hoped that the hydrogen-powered train may be used to transport visitors whilst also including an on-board boardroom allowing guests of the event to use the train.

The HydroFLEX pilot, a partnership between BCRRE and railway stock leasing company Porterbrook, involves the fitment of a hydrogen powerpack to an existing Class 319 train, which would eventually allow it to run on conventional electrified routes as well as independently.

HydroFLEX rose from a student-led project into a narrow-gauge hydrogen-powered locomotive which sits wholly within the UK’s decarbonisation goals.