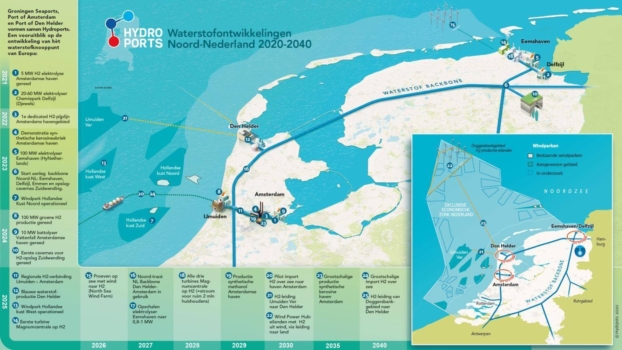 The Dutch ports of Amsterdam, Den Helder and Groningen have presented a joint position paper to the Ministry of Economic Affairs and Climate Policy on their plans to become Europe’s leading hydrogen hub.

Under the name Hydroports, the three ports entered into a hydrogen partnership last year, which will see them develop an extensive hydrogen infrastructure in the north west of the Netherlands.

These plans are in line with the Dutch Government’s recently announced hydrogen strategy which underlined the country’s ambitions to use its “unique starting position” in the gas value chain to become world leaders in the production and use of green hydrogen.

The Ports of Amsterdam, Den Helder and Groningen, together with Gasunie, are committed to the realisation of a national hydrogen backbone, supplying the important industrial clusters in the Netherlands with hydrogen.

Each of the three ports has its own position and role in this. The position of Port of Den Helder is of strategic importance in all of this, due to its connection to the gas pipeline system in the North Sea and its central location in relation to the planned offshore hydrogen production locations.

As a first step towards creating a hydrogen backbone, Den Helder is exploring building a blue hydrogen production facility.