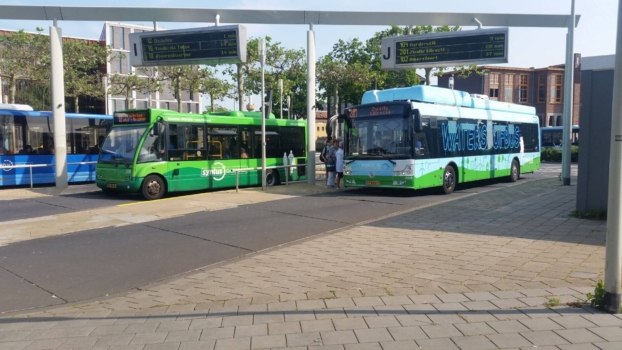 A consortium of companies is working to advance the cause of hydrogen buses in a Dutch and German city.

The buses operated daily on inner-city and regional bus lines, usually for between 270 and 440 kilometres per day with average speeds of about 50km/hour.

Keolis said the hydrogen buses’ average cost per kilometre is at the level of buses running on diesel or natural gas.

Theo Hendriks, CEO of HyMove, said the project delivered such impressive results that decision makers wanted to implement the vehicles at scale.

HyMove supplied the hydrogen fuel cells for the buses, which were equipped with composite storage cylinders from Worthington Industries, and helped to integrate the entire system into the vehicles.

HyMove said its fuel cells allowed the demonstration buses to use only 6.1kg per 100km of use, which is up to 30% lower hydrogen consumption than that of competitive systems, according to Hendriks.

The cylinders consist of a seamless aluminium alloy liner, fully overwrapped with high-performance fibres in an epoxy resin matrix.

Together these storage containers can hold up 33kg of hydrogen gas, and each is rated to withstand 350 bar of pressure. This provides each vehicle with a range of up to 450km per one filling.

“Given the strong market outlook, Worthington is preparing to open a new composite cylinder production facility in Austria this summer to supplement the output of our existing plant in Poland,” Nunić said.

Over the past decade, HyMove has differentiated itself in the market by opting to focus on producing hydrogen fuel cells solely for heavy-duty buses and trucks.

“We need durability, efficiency and the longest life, in order to lower in-use cost,” Hendriks said.

“If you want to be best in class, you need best-in-class partners, and that’s why we are working with Worthington.”

One the keys to making hydrogen cost competitive is for the users to build up a critical mass of at least 20, and preferably 30, such buses in a fleet, Hendriks explained.

That helps to justify the cost of building hydrogen refuelling stations to serve these heavy-duty vehicles.