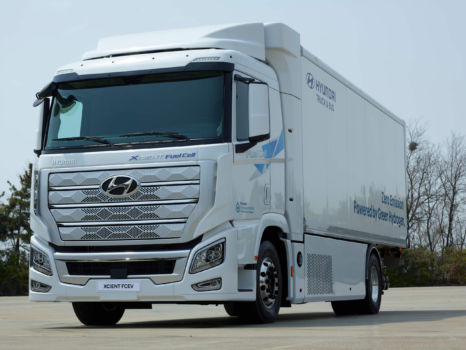 The multi-million-dollar project will see the integration of Luxfer hydrogen cylinders into Hyundai’s Xcient fuel cell trucks. The project is due to complete later this year.

Hyundai’s trucks will transport supermarket deliveries and other good across Switzerland, with the help of more than 400 Luxfer G-Stor™ H2 hydrogen cylinders.

Fuelling time to full charging takes approximately eight to 20 minutes and the truck can carry a load comparable to a diesel truck.

The deployment is part of Hyundai’s plan to put 1,600 hydrogen trucks on Swiss roads by 2025.

Hyundai is also set to launch similar projects in other European countries.

Mark Lawday, a Director at Luxfer Gas Cylinders, said: “We’ve been working with Hyundai for around ten years on prototypes, as Hyundai is hugely committed to hydrogen power. Our role is to provide the knowledge of a complete fuel system to bring their ideas to life.”

“There is significant interest in hydrogen and CNG (compressed natural gas) across the world, and Governments are now committing to cleaner transport technology as a route to meeting zero emission targets.”

“Switzerland is an ideal market for hydrogen-powered trucks, thanks in part because the country generates more than half of its energy from hydropower, so if this can be used to generate the hydrogen then it completely eliminates emissions.”

Hydrogen by road, rail or river