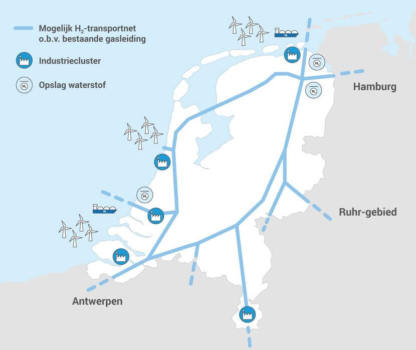 HyWay 27 investigating use of Dutch gas network to transport hydrogen

The Dutch Ministry of Economic Affairs and Climate, together with Gasunie and TenneT, are investigating which part of the existing gas network in the Netherlands can be used for the transport of hydrogen.

With the recently published Dutch government vision on hydrogen, the government has presented an ambitious policy agenda to achieve the development of a sustainable hydrogen chain.

From a cost-effectiveness point of view, an important starting point is that the existing natural gas infrastructure is reused (in phases) where possible for the transport of hydrogen.

With the HyWay 27 study, network operators Gasunie and TenneT, together with the Ministry of Economic Affairs and Climate, are mapping out how and under what conditions the existing gas network can be used for the transport of hydrogen in the future.

The hydrogen market is pre-eminently international. It is therefore important to have a clear picture of the supply and demand on the Northwest European hydrogen market.

The Port of Rotterdam Authority will map out the potential import supply (from overseas areas), including examining the possibility of connecting the main hydrogen infrastructure (the so-called hydrogen backbone) to cross-border pipelines in neighbouring countries such as Germany and Belgium.

During the investigation, various stakeholders are involved to test the findings. The final report is expected to be completed by the end of 2020.