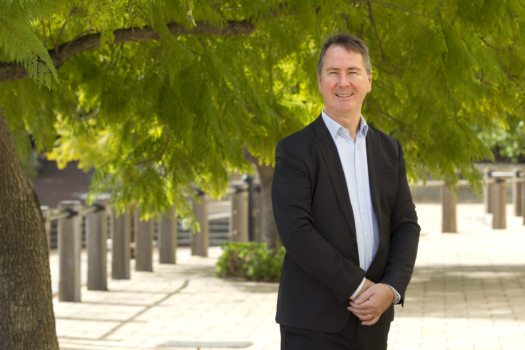 If you hadn’t heard of Infinite Blue Energy a month ago, you definitely will have today. In the last four weeks the Australian hydrogen specialist secured funding to build a $300m green hydrogen plant in Western Australia and unveiled bold billion-dollar plans to transition New South Wales from fossil fuel-based electricity to green hydrogen by 2027.

Infinite Blue Energy (IBE) wants to enable a sustainable green hydrogen future from water, solar and wind energy, with no carbon debt. At the centre of this vision is Stephen Gauld (pictured above), IBE’s founder and Managing Director. With more than 20 years’ experience in the oil & gas sector, Gauld believes this was the right time for IBE to enter the market.

“Covid-19 has opened the world’s eyes to our reliance on fossil fuels and the need to move to renewable energy. In the last two months we’ve achieved a 10% reduction of global CO2 emissions due to the fact that no one is able to travel at the moment,” Gauld told H2 View.

While cities have been locked down to curb the spread of Covid-19, nature has set the reset button. “This is just in two months, think about what we can do in the next ten years. Infinite Blue Energy can assist in the reduction of CO2 emissions by redeploying new green technology to the market,” Gauld said.

Despite the increasing interest in liquid hydrogen as a zero carbon fuel, Gauld said there are very few instances of commercial or sub-commercial scale green hydrogen production.

“Existing hydrogen production facilities use traditional fossil fuels with the associated carbon debt. When Stage One of IBE’s Arrowsmith Hydrogen Project, located in Western Australia, commences in 2022, it will produce 25 tonnes (25,000 kg) of green hydrogen per day from water, solar and wind energy with no carbon debt,” Gauld said.

H2 View caught up with Gauld on the phone to talk more about IBE’s two recently announced projects and where the company’s name came from.

You just mentioned the Arrowsmith Hydrogen Project, could you tell us more about this?

The project is around 190 miles north of Western Australia’s capital Perth. It has an initial build of 85 megawatts of solar technology, 75 megawatts of the wind turbine, and we’ve also chosen to go with electrolysers to split water into hydrogen and oxygen.

The project will be the first large scale plant in Western Australia, and is located a natural wind corridor, generating electricity for 21 hours a day, complimented by the sun.

The plant is completely green in design and we intend to make it a model fro green development. We’re going to also have an interpretive visitors centre to attract schools, universities and general tourists who are travelling past.

H2 View understands IBE’s concept is designed around a series of installations distributed throughout regional Australia, rather than a single large plant. Can you tell us about this?

During our discussions on the initial build of the plant, we looked at whether we wanted to make one large plant or a series of smaller plants. We ended up selecting a modular and scalable design that can be located anywhere in the world.

The plant will produce 25 tonnes of green hydrogen a day. What will this be used for?

Initial production will go to heavy vehicles such as road trains. Road trains here in Australia are basically trucks with multiple trailers, up to 130-150 tonnes in weight. And also buses as well. We also expect a growth as people move to hydrogen fuel cell vehicles, including taxis for the general public. We plan on distributing most of the hydrogen to vehicles.

We’re looking to expand from 25 tonnes a day to 150 tonnes of hydrogen a day.

So, the initial plant will produce 25 tonnes that will go to vehicles, scaling up to 100 tonnes which may be injected into nearby domestic gas pipelines.

Just last week IBE announced project NEO, a $3.5bn initiative that will target one gigawatt of 100% green hydrogen reliable baseload power using a combination of solar PV, wind turbines and hydrogen fuel cell technology. Could you give us more detail on the feasibility study and detailed design you will be working on over the next 18 months?

The project is located in the Hunter region of New South Wales, which is dominated by coal and steel manufacturing. The provision of 1GW of renewable green electricity will provide a model for decarbonising traditional industries.

What attracted IBE to New South Wales when deciding on a project location?

Where did the name Infinite Blue Energy come from?

Infinite because hydrogen is made from water and there is an abundance of water; blue because everyone associates water with blue; and energy because we’re an energy company.

Finally, if you could leave our readers with one hydrogen-related message. What would it be?

Support the transition to renewable green hydrogen energy. If you’re looking to purchase a new petrol or diesel car, delay that purchase and invest in a cleaner, energy vehicle. I encourage everyone to delay that expenditure and go ahead and buy one of these new zero emission fuel cell vehicles.