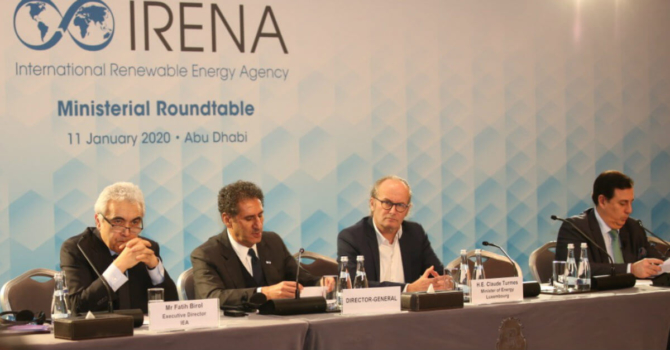 As energy leaders from around the world meet for the 10th Assembly of the International Renewable Energy Agency (IRENA), participants of a ministerial roundtable on hydrogen have identified hydrogen produced by renewable energy as a potential key accelerator of the energy transition and enabler for a wider global decarbonisation.

“Green hydrogen is gaining unprecedented political and business momentum, with a number of policies and projects expanding rapidly around the world,” said IRENA’s Director-General Francesco La Camera at the opening on Saturday.

Providing the keynote to the ministerial, Fatih Birol, Executive Director of the International Energy Agency (IEA) underlined the important role of hydrogen for decarbonisation.

He said, “Hydogen can help overcome many difficult energy challenges. It can decarbonise hart-to-abate-sectors like steel, chemicals, tucks ships and planes.”

“Hydrogen is very important for us,” said Yasuhiro Matsuyama, Director-General of the Energy Conservation and Renewable Energy Department of METI Japan.

“We want to make it a marketable tool for the future. For that we need infrastructure and pipelines. Furthermore, hydrogen can be a tradable energy of the future.”

Many projects are under development to scale up production of hydrogen from electrolysis for domestic consumption in industry, transport or for injection in the gas system.

EU Energy Commissioner Kadri Simson added, “Hydrogen is a key instrument for meeting the Green Deal objectives and Europe is leading on its industry development.”

Further acceleration of efforts is critical to ensure a significant share of hydrogen in the energy system in the coming decades.

Electrolysers, the devices necessary to produce hydrogen using electricity and water as inputs, are scaling up quickly as technology continues to evolve and costs are projected to halve in the coming decades, participants of the ministerial roundtable agreed widely.

Consent was broad that in addition to becoming the cheapest source of electricity in most countries around the world today, renewables, when used for electrolysis of water, may become the cheapest pathway to produce hydrogen.

“Our vision of hydrogen is to store large quantities of renewables,” said Michèle Azalbert, CEO of ENGIE’s business unit dedicated to renewable hydrogen.

“We want to develop different types of solutions to increase the demand and scale the production of hydrogen solution together with complementary partners.”

Manuel Kuehn, Siemens Middle East Senior Vice-President for strategy and business development, overseeing the joint green hydrogen pilot project in the UAE, commented, “We target decentralised and large-scale application. It’s important to leave the pilot phase and scale up projects that are viable.”

Ministers concluded by underlining IRENA’s role in supporting the development of hydrogen from renewable power in Member countries.

IEA’s Fathi Birol said, “We need to build a grand collation and work together with all countries and stakeholders of the world. Cooperation between IEA and IRENA will be key in this regard.”

So far, IRENA’s work on hydrogen from renewable power focuses on assessing the role of green hydrogen in the energy transition and an enabler to integrate higher shares of renewable energy in the power sector.

To this end, in 2018, IRENA released the Hydrogen from renewable power: Technology outlook for the energy transition report which gives an overview of key sectors for renewable-based hydrogen uptake and the production of hydrogen through electrolysis using renewable power.

In addition, the latest Hydrogen: A renewable energy perspective report, released in September 2019 expands on the previous report bringing insights about strategies to accelerate the development of competitive hydrogen from renewables and highlights the rapidly increasing activity on green hydrogen in many countries.