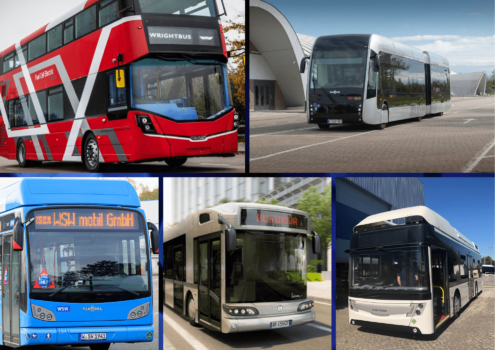 More than 200 hydrogen fuel cell buses have been ordered through the Joint Initiative for Hydrogen Vehicles across Europe (JIVE) projects (JIVE & JIVE 2).

The first 50 buses operating in Cologne (DE), Pau (FR) and Wuppertal (DE) are already in regular service on some of the cities’ most demanding routes.

Through the JIVE projects, German transport company Regionalverkehr Köln GmbH (RVK) operates the largest fleet of fuel cell buses in Europe to date: 35 buses. This will increase to 50 by the end of 2021.

The JIVE project is catalysing the development of Europe’s hydrogen bus sector and will help ensure that fuel cell buses can contribute to meeting the requirements of the Clean Vehicle Directive.

According to UITP forecasts, a minimum of 22.5% of all new buses ordered next year across Europe will have to be zero emission to comply with the legislation.

European bus manufacturers such as Caetano, Safra, Solaris, and Van Hool have shown their commitment to commercialising these vehicles.

The JIVE projects have additionally laid the foundations for further growth of the European fuel cell bus sector.

Follow-up initiatives to introduce more vehicles in other parts of Europe are already being implemented: the H2Bus Europe initiative, for example, aims to deploy 600 buses in Denmark, Latvia, and the UK.

Bart Biebuyck, Executive Director of the FCH JU, who co-finances JIVE and JIVE 2, said, “In 2012, the FCH JU released a study on the path for commercialisation of fuel cell buses, forecasting that 300 to 400 ordered buses by 2020 would be the key threshold to trigger the market.”

“This is exactly what the JIVE projects have achieved, by deploying bus fleets of up to 35 buses.

“The order of the 200th fuel cell bus is an important milestone for this clean technology for public transport. Many more orders for fuel cell buses will follow still this year, demonstrating its performance and cost benefits.”