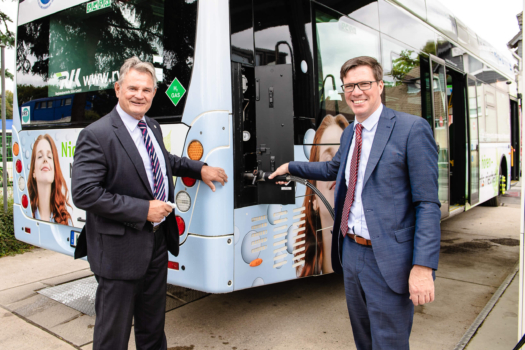 With a capacity of up to 20 refills per day, the new station located near Cologne, Germany features, for the first time, a new high-pressure storage technology developed by Linde: constant pressure tubes ensure that the refuelling pressure always remains at a constant level, even as the storage tank volume decreases.

This has the significant benefit of enabling multiple back-to-back fillings even for larger vehicles, such as buses.

The core of the hydrogen refuelling station are four Ionic compressors, developed and supplied by Linde Hydrogen FuelTech.

This technology that is well-proven with car filling stations – bring the hydrogen to a storage pressure of around 500 bar (7,250psi).

The compressors can be operated with different load profiles, guaranteeing a particularly high service level at the filling station.

The hydrogen supplied by Linde is stored in two low-pressure tanks with a combined capacity of approximately 900 kilograms.

“Local public transport is playing a pioneering role here. Just like the first hydrogen filling station for trains that Linde is installing in Northern Germany, this modern bus filling station represents an important milestone in this transition.”

Eugen Puderbach, Managing Director of RVK, commented, “I consider all my fellow campaigners as pioneers who recognized the value of this alternative drivetrain for effective climate protection early on and who had the courage to jointly design and develop this project.”

The project is being co-funded by the German Federal Ministry of Transport and Digital Infrastructure as part of the BIC H2 (Buses, Infrastructure, Cologne Region) initiative.